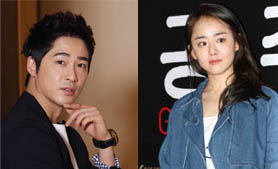 According to Korean media outlet Munhwa Ilbo on Monday, a source related to KBS commented, “We asked Moon to join the project. After reading the screenplay, the actress has shown a positive response, so we are currently at the stage of negotiating the details.”

If Moon decides to take on the role, the new project, which is scheduled to air in October, will be the actress’ first drama series in two years since her last, “Goddess of Fire,” which aired in 2013.

Similarly, Kang is also reported to be positively considering “Home Alone.” The actor, who currently has a hectic schedule due to his participation in the Korean-Chinese film “Cheongangdaega,” is known to be adjusting his schedule to take part in the KBS drama.

However, the actor’s talent agency, Sim Entertainment, claimed that “Kang’s participation in the TV drama has not yet been determined.”

The upcoming drama revolves around a successful businessman who left Korea for the United States after losing his family. The plot develops as he returns to his home country and hires a woman to look after his beloved dog.