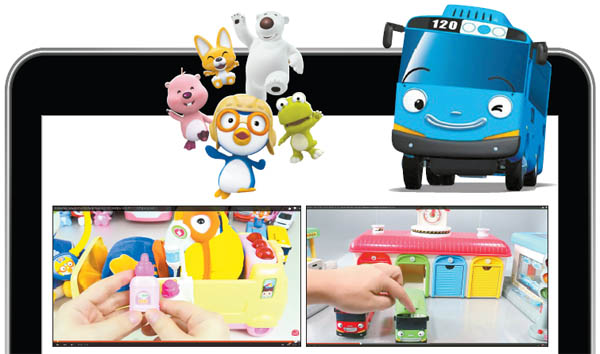 Unboxing channels, which show consumers unpacking new products, are among the most popular channels on YouTube. Left is a video still of a Pororo Hospital toy being unpacked on the ToyPudding TV channel; Right is a video still of a Tayo’s Car Wash and Garage toy set on the Nao Disney Toys channel.[Screen Capture]

Kim Young-seon, 36, a mother of two in Seoul, allows her kids to watch cartoons using her tablet PC for about 30 to 40 minutes every evening while she prepares dinner. For her four-year-old daughter, who loves Pororo, and six-year-old son, who is into Tobot, Kim subscribes to the corresponding channels on YouTube.

“At some point, we started watching more of the kids’ channels provided by YouTube using a tablet PC rather than watching television in our living room,” Kim said.

Because YouTube analyzes the history of what the user watches and recommends videos, it’s easy for kids, even those who can’t read yet, to line up the next video with just a few taps, including any “unboxing videos” that depict people opening and playing with popular toys.

“It’s impossible to stop children from watching them, especially when they are familiar with the gadgets from a young age,” Kim said.

David Herrit, 40, who lives in Los Angeles, has been searching for a place that sells a toy of his son’s favorite cartoon character, Tayo. Herrit first encountered the Korean cartoon series “Tayo the Little Bus” six months ago, when it became available on YouTube in English. Because he subscribes to the official YouTube channel for his son, he naturally came across an unboxing channel, on which a father was opening up a Tayo toy for his child.

“I’ve already purchased the toy bus, but when I saw other Tayo toys, like the Car Wash set or the Garage set, I wanted to get them for my son as well,” said Herrit.

TV shows that have long been popular among Korean kids, like “Pororo the Little Penguin,” “Tayo the Little Bus” and “Robocar Poli,” are now enjoying global appeal. Through smartphone apps and YouTube, kids not only in Korea, but in North America, Europe and even the Middle East, are watching the shows and dying to get their hands on Korean cartoon character toys.

Since the spread of these popular children’s shows to YouTube, a number of other content creators have benefitted from the worldwide popularity of Korean characters, including toy unboxing channels on YouTube. Like the original shows, these videos are enjoyed by a growing number of fans around the world.

One hit character, Pororo, first appeared on Korean TV in 2003. Since 2011, the show has been available to global audiences through YouTube. Currently, there are about 850,000 subscribers to the Pororo channel, and accumulated views of the uploaded videos total over 690 million. Thirty percent of the users are from overseas who watch the clips in English.

As for “Tayo the Little Bus,” it debuted on Korean television in 2010 but has since achieved more global acclaim than Pororo. Currently, subscribers to the show’s YouTube channel total around 556,000, while the accumulated views exceed 533 million. Among about 50,000 views that the Tayo channel accumulates every month, 85 percent are from overseas. The channel is especially popular among kids in England and America, according to YouTube.

“When looking at the number of views in May, Tayo has been more popular than the British character Thomas and Friends or Spanish animation character Pocoyo,” said an official from YouTube.

Furthermore, the YouTube channels for “Robocar Poli” and “Tobot,” which are more popular among slightly older children, have regular subscribers of around 20,000 to 30,000 people, with more than 100 million accumulated views each.

Iconix Entertainment, which created Pororo and Tayo, has emerged as a major player in the industry, gaining 100 million new viewers from across the globe each month. The company doesn’t have to depend on traditional distribution networks to spread the animation series to overseas markets anymore.

“Just a few years back, in order for us to enter the global market, we had to find a competitive broadcasting partner in that specific country so that we could supply our animation series to one of the local broadcasting stations. But things are different now,” said Jeong Dong-su of Iconix. “By using global distribution channels, we could only spend a tenth of our usual production cost and still turn the content into a global success.”

The other type of channel seeing success from the rising popularity of Korean characters is toy unboxing channels. Their target audience, of course, is kids who are amazed at just watching others play with toys, but parents also watch them to learn about the features and functions of the toys before purchasing them for their kids.

“Surprise Collector and Sunshine” and “Fun ToyzCollector” are the two most popular toy unboxing channels on YouTube. A 9-year-old boy named Evan living in the U.S. is also famous for making 1.4 billion won ($1.2 million) a year in advertising revenue for his toy unboxing videos, which are watched by 1.3 million subscribers to his YouTube channel, Evan TubeHD. These days, he has moved on to reviewing snacks.

Korean unboxing channels that are modeled after these channels are gaining more viewers as well. ToyPudding and Nao Disney Toys are two of the most popular. Nao Disney Toys is ranked as the No. 1 most-watched kids’ channel among YouTube users in Korea. An 11-minute unboxing clip of a mini Tayo’s Car Wash and Garage set, which shows an adult hand playing with the toy, washing the Tayo Bus, filling it with gas and so on, has been viewed by more than 162.2 million people as of Monday. Below the video are comments in Chinese, Arabic and English.

The channel operator, who wanted only to be identified as “A,” said he is “a father of a young kid and an ordinary employee in [his] 30s.”

“At first, I created video clips of me playing with the toys to show them to my kid, then I ended up here,” he said. Ninety percent of his views come from overseas.

Since these unboxing channels have an effect on the actual sales of toys, “A” says he receives floods of sponsorship offers from toy companies. The toy brands themselves have also jumped in on creating their own unboxing channels on YouTube. Young Toys, which makes the famous transforming robot toy Tobot, as well as the favorite of young girls Kong Suni, launched its own official unboxing channel in April.

“We are trying to approach children in a more friendly way through an unboxing channel, which have become the hottest trend among young kids these days,” said Han Chan-hee, CEO of Young Toys. “According to our findings, about 20 percent of our children customers have made a purchase after watching our unboxing channel, and most of them are said to have searched for videos by themselves.”

The content market based on these popular cartoon characters is expected to grow continuously. According to a report by the Korea Creative Content Agency in March, the size of the local character industry is around 8.307 billion won, and it has been growing annually at an average rate of 11.6 percent for the past five years - the fastest growth among all the content industries.

Witnessing this growth, Google created a Family Section in its smartphone application market, Google Play. Considering the unique characteristics of the market, in which the content consumers are children while the product purchasers are parents, Google gathered games, animations and educational applications in one place to catch kids’ attention. However, this section also contains advertisements, and payments can be made with just a few taps, so parental supervision is required.

Google Play product manager Eunice Kim assured that the company only accepts advertisements that are suitable for the age group, and that payments can only be made after typing in a pass code set by parents. She explained that Google is making sure that children, who are their future consumers, are not excluded from their marketing plans, while placing a high priority on their safety.

Meanwhile, YouTube, which has been criticized for allowing children to be exposed to adult advertisements without any protection, came out with “YouTube Kids” in the United States in February. However, it has not yet arrived in Korea.