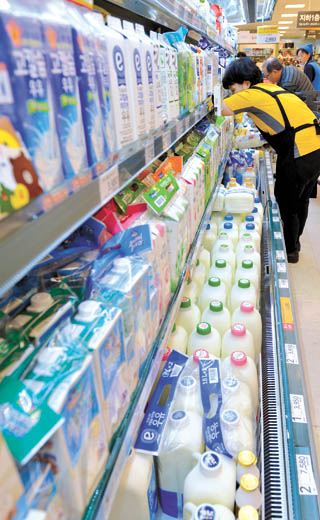 Various milk on sale at E-Mart in Yongsan District, central Seoul, on Monday. Starting today, Korean milk will be allowed to be exported to China, which has been on hold since May. [NEWSIS]

Korean milk export to China resumes on Tuesday, after the relaxing of an import halt started last May as the Chinese government tightened sanitary standards on foreign food products.

According to the Ministry of Agriculture, Food and Rural Affairs on Monday, three Korean dairy companies - Maeil Dairies Industry, Yonsei Milk and Seoul Dairy Cooperative - succeeded in getting some of their products registered as safe to be imported by the central government of China early last month.

Maeil plans to boost exports to 110 tons of fresh pasteurized milk by the end of this year, while Seoul Milk is set to export 126 tons during the same period. 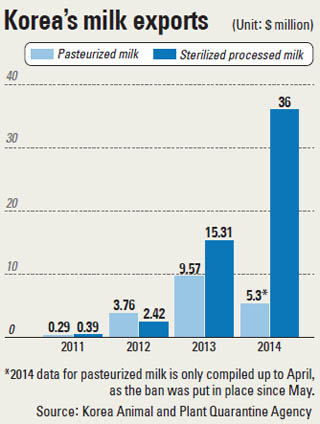 Each factory was approved and registered after officials from the Chinese food safety ministry visited to check pasteurizing facilities.

Two more dairy companies are trying to get their facilities registered with the Chinese government. The Agriculture Ministry is scheduled to publish detailed sanitary guidelines by the end of this month for exports to China.

While China’s imports of fresh milk stopped last May, imports of sterilized milk continued. Those exports accounted for $36 million last year, up from $15 million in 2013 and $2.4 million in 2012. The high-temperature sterilization process satisfied Chinese government standards.

“About 1 percent of total milk production is expected to be exported, and that’s not enough to help lift sales of the three dairy companies in the short term,” Lee Kyung-joo, an analyst at Korea Investment & Securities, wrote in a report. “But if they construct retail networks in the Chinese market, the companies will gain sales over the long term.”

Lee explained that pasteurized milk producers have suffered losses due to oversupply. Exports to China may be a solution to the surplus, Lee added.

“Korean dairy makers so far have done a good job with exporting sterilized milk,” said Song Seong-ok, an official from the livestock sanitary and safety department at the Ministry of Food and Drug Safety.

“But Korean fresh milk can be competitive in the Chinese market,” Song said, “because Korea is one of the very few neighboring countries that the Chinese can import fresh milk from and satisfy local demand for fresh milk instead of sterilized milk.”

Local milk consumption is slowing. According to the Korea Dairy Committee, the country’s annual per capita consumption of pasteurized milk was 26.9 kilograms (59.3 pounds) last year, a drop from 28.1 kilograms in 2012.

Aside from milk, the Korean government has hopes for other food exports to China. Food is one of few export areas that can see immediate growth ahead of the Korea-China Free Trade Agreement taking effect as early as next year.

According to the Ministry of Trade, Industry and Energy, Korea’s food exports reached $5.06 billion last year, a year-on-year increase of 11.4 percent. Korea is also getting for food trade partners. It exported food to 15 countries last year, from eight in 2007.

However, other Korean food products popular with the Chinese, like kimchi and cooked samgyetang (traditional chicken soup with ginseng), are still waiting to pass sanitary standards for import to China.

“Consultations between the two governments to ease import regulations for uncooked kimchi have seen advances recently,” said an official at the Agriculture Ministry.

Korean uncooked kimchi has been subject to an import halt by China since 2003 due to sanitary concerns, while made-in-China kimchi imports to Korea have steadily risen over the past few years to 212,940 tons last year.

The Korean government is also working on sanitary standards with China to export cooked and packaged samgyetang products. But Song from the Food Safety Ministry said that is likely to take up to five years.