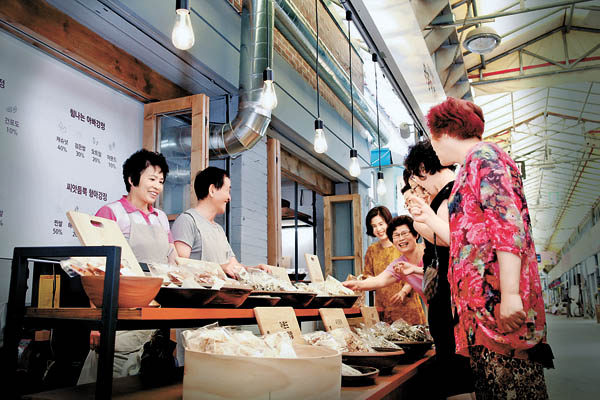 The Gwangju Creative Economy Innovation Center, developed by Hyundai Motor Group in South Jeolla, has launched a project to boost the local economy by remodeling stores in traditional Korean markets that have a hard time attracting customers.

The company said on Monday it has been trying over the past four months to improve the competitiveness of traditional markets in Gwangju by remodeling old stores in cooperation with its affiliate Hyundai Card. The company said two newly remodeled stores selling hangwa, traditional Korean biscuits, and oriental herbs for medical treatment opened after learning new product packaging, display methods and other marketing strategies from the center.

The Gwangju center is the nation’s sixth creative innovation center, part of the government’s creative economy initiative in which large conglomerates are matched with regions to help boost sagging local economies. It opened in January. Other chaebol like Samsung and SK Group have also opened centers.

When the Gwangju center opened, it said it would mainly focus on enhancing the local economy in Gwangju and South Jeolla. Helping the two stores remodel and develop new business portfolios was part of the center’s effort to improve the economy. The center said it will help the hangwa and herb stores share their experiences with other merchants.

The hangwa store run by Lee Hae-seong, 65, has been in business for 30 years. The traditional biscuits were so popular that customers from as far away as Seoul used to order them. But now, the store can’t attract young people, who are more familiar with fast food snacks. Hangwa remains popular during traditional holidays like Chuseok, the Korean harvest festival.

After consultations with the center, Lee decided to make four new types of hangwas that people can enjoy anytime, including a “gimbab gangjeong,” a snack made with mixed nuts in the shape of a rice roll. Lee’s wife also traveled to Seoul several times to learn packing methods for the snacks.

“I previously focused on selling products,” Lee said. “But I also want to relate to customers how tasty and healthy these traditional snacks are.”