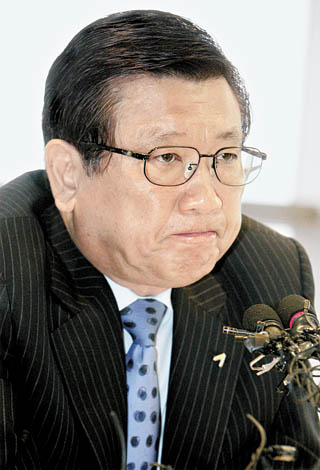 The chairmen of Korea’s conglomerates usually focus on the bigger picture during executive meetings on business strategy. But this wasn’t the case on Friday for the 156 high-ranking executives from the Kumho Asiana Group at their strategic management meeting, which took place at its employee training center in Yongin, Gyeonggi.

Kumho Asiana Chairman Park Sam-koo gave specific reviews for each affiliate, demanding high-level reforms - a likely sign of his aims to be more personally and directly involved in the corporation’s management. His stronger oversight comes at a time when the conglomerate has succeeded in reacquiring Kumho Busline, its cash cow, and is involved in negotiations with creditors in repurchasing management rights for Kumho Tire.

After leaving the position in July 2009, Park’s comeback among conglomerate owners is considered to be strong.

“If Kumho wants to exist for the next 500 years, we need to overhaul our very nature,” he said at the seminar. “For a company to maintain sustainability, it needs to undergo the development process of inheriting the past and changing it.

“We need to change our constitution through endless effort.”

“At all levels - quality, production, technology, sales and management - Kumho Tire is failing,” he continued. “Although there are various reasons, including the struggling global market, the depreciation of the euro and slow growth in the automotive industry, for poor first quarter performance, there is no excuse for operating profit to have dropped so significantly compared to our competitor.”

Mentioning the achievements made by the company’s rivals, Park demanded solutions to boost overall business, including strengthening investment in its facilities and research and development. “We need to reorganize the strategic directions of the company,” he said. “In order to survive, we need to change our policies, which were previously focused on production, to focus more on quality.”

In regard to Kumho Buslines, the chairman said it needed to adapt to the changing current environment, especially the opening of new KTX routes connecting to Jeolla, viewing it as an opportunity.

“The profit of express bus businesses is directly connected to route management and therefore, the company needs to thoroughly reanalyze to develop new routes,” he said.

Park also commented on Kumho E&C, the conglomerate’s construction arm. “Currently we are focusing mostly on the M&A with Kumho Industrial,” Park said. “But more important is when the M&A is over. We need to put our efforts in winning more orders and improving our cost rates.”

On Asiana Airlines, Park asked the employees to attend to their work with more urgency, as the company has been under emergency management since the Middle East respiratory syndrome outbreak.