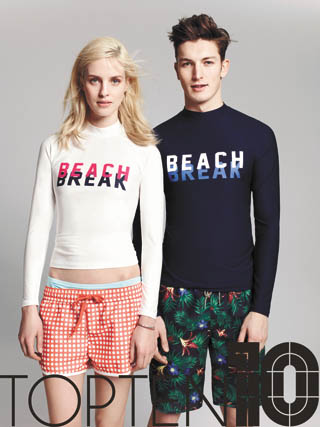 The nation’s fair trade watchdog said nearly half of the rash guards sold by popular brands in Korea were of lower quality than advertised.

The rash guard, a type of functional swimwear that blocks UV rays and traps body heat to keep swimmers warm, is seen as one of the must-have items for the summer vacation season in Korea. The gear is usually worn by surfers but became a hit among young people, thanks to recent ads featuring popular celebrities.

Advertised to be made of highly technical textiles, rash guards are often priced up to 99,000 won ($86).

The rash guards by Descente and STL were less durable than advertised.

Descente, Le Coq Sportif, Barrel, Hurley and STL advertised that their swimwear was made from a fast-drying textile, but showed an average drying time of 3.6 hours.

All 12 products actually showed the stated ultraviolet protection factor of between 40 and 50 plus, indicating an ability to block 99 percent of UV rays.

“People should pay careful attention that products have the manufacturer’s contact information and the state-run quality certification ‘KC mark’ on their label,” advised Kim Yeon-hwa, chair of the KCAI.