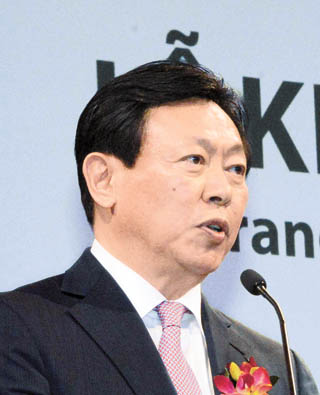 Lotte Group Chairman Shin Dong-bin is expected to revise his “Vision 2018,” announced six years ago, after he gained official control of the retail giant’s businesses in Japan last week.

The 60-year-old chairman on Thursday became chairman of Lotte Holdings, the holding company of the Lotte Group in Japan, which was previously held by his brother Shin Dong-joo. This sealed his control of Lotte operations in both Korea and Japan. It is believed to be the first step in uniting the businesses in both countries.

According to industry sources, Hwang Gak-kyu, president of policy coordination at Lotte Group, is already making adjustments to the chairman’s Vision 2018.

In 2009, Shin teamed up with the Boston Consulting Group to devise long-term goals for the Korean retail giant to expand into a conglomerate that would be 10th-largest in Asia with annual revenues of 200 trillion won ($173 billion).

“It seems that Chairman Shin has come to the conclusion that the vision needs to be readjusted, as the leadership has changed and the retail industry is also changing rapidly,” said a high ranking official at Lotte.

The biggest change in the vision is said to be “select and focus” and “synergy management.”

Lotte said it is looking into the idea of choosing duty free shopping, hotels, chemicals and finance as core businesses and focus its resources on enhancing those businesses. Additionally, since food and beverages are key businesses in Lotte Japan, it plans to generate synergy with Lotte Shopping and Lotte Confectionery.

For new growth engines, the retail conglomerate is likely to inject large amounts of investment, but the affiliates that are not picked will likely undergo heavy restructuring, and some will probably shut down.

One of the key areas for Lotte is chemicals.

On Friday, the day after Shin was officially made the head of Lotte Japan, he visited Lotte Chemical’s headquarters in Sindaebang-dong, southwestern Seoul, where he was briefed on business.

On the contrary, investments in department stores and supermarkets is expected to decline. Lotte Group is expected to pursue merger and acquisitions in channels that combine offline and online shopping in order to raise synergy with existing branches and businesses.

“Considering the size of changes that Lotte will undergo, we can’t say the funding we have is sufficient,” a Lotte official said. “Our investments will likely focus on quality more than on quantity.”