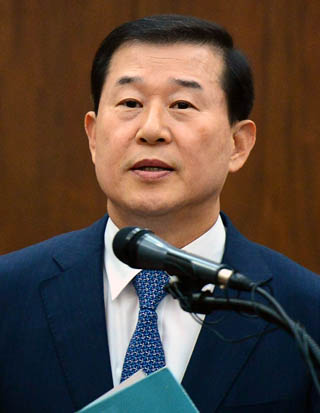 Lee, 57, is an elite judge with 30 years of experience in various positions. He passed the bar exam in 1980 and worked in courts nationwide, including as senior judge of the Seoul High Court and the head of the Seoul Southern District Court. Since 2013, he has been serving as the chief justice of the Seoul Central District Court.

“During his three-decade career on the bench, Judge Lee issued many verdicts that protected human rights and focused on the law, justice and principles,” said Min Kyung-wook, a presidential spokesman. “He is highly trusted for his pragmatism and great performance. With his strong conviction to protect the human rights and leadership, Lee is the best candidate to head the commission. We have high expectations for his contributions to the development of the commission and the improvement of Korea’s prestige.”

Lee will succeed Hyun Byung-chul, whose tenure will expire on Aug. 12. The head of the National Human Rights Commission is a minister-level post and its tenure is three years with the possibility of one extension.

Lee must first go through a confirmation hearing by the National Assembly to take office.

If he passes, he would be the first person appointed by Park to lead the National Human Rights Commission. Hyun, appointed during the Lee Myung-bak administration in July 2009, served as the commission’s head for six years, taking a second term in 2012.

“I feel heavily responsible being named to this important post,” he said in a media conference. “I will do my best to improve public confidence and support for the commission if I pass the confirmation hearing and am appointed.”

One of the most notable cases over which Lee presided was the 2009 retrial of six people wrongfully convicted of anti-state crimes against the Chun Doo Hwan regime.

In 1980, the defendants were indicted on charges of plotting and creating an anti-state organization during a party. Three years later, they were convicted and sentenced to prison terms ranging from 18 months to 10 years. They received special pardons in 1988.

The defendants filed for a retrial in 2000, and were acquitted in 2009 by the Seoul High Court, presided over by Lee at the time.