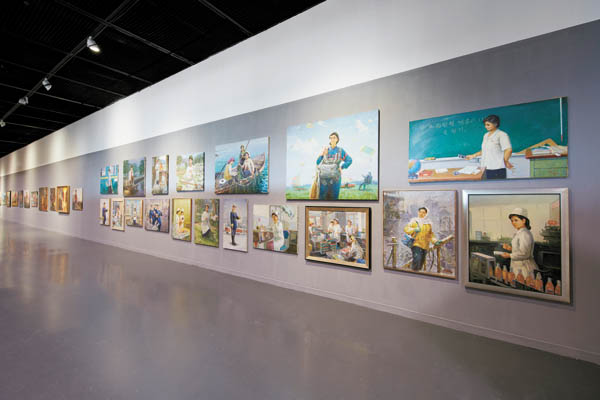 North Korean oil paintings with propagandistic themes are on display at the Seoul Museum of Art. Loaned by Dutch collector Ronald de Groen, they are being shown in the South for the first time. Provided by the museum


An exhibition that provides a rare glimpse inside North Korea opened at the Seoul Museum of Art (SeMA) on Tuesday to commemorate the 70th National Liberation Day that will fall on Aug. 15.

Regarding the intention of the show, titled “NK Project,” the museum said, “We need to put our heads together and discuss how we should represent, imagine and connect with North Korea as the very close but distant ‘other,’ before it is too late.”

Kang Ik-joong’s installation piece “Geumsugangsan,” which portrays his hope for unification of the two Koreas, is part of the “NK Project” show at the Seoul Museum of Art (SeMA). The title means the beautiful natural scenery of the Korean Peninsula.

The oils and posters, loaned by Dutch collectors, and the stamps, loaned by a South Korean collector, are being shown in the South for the first time.