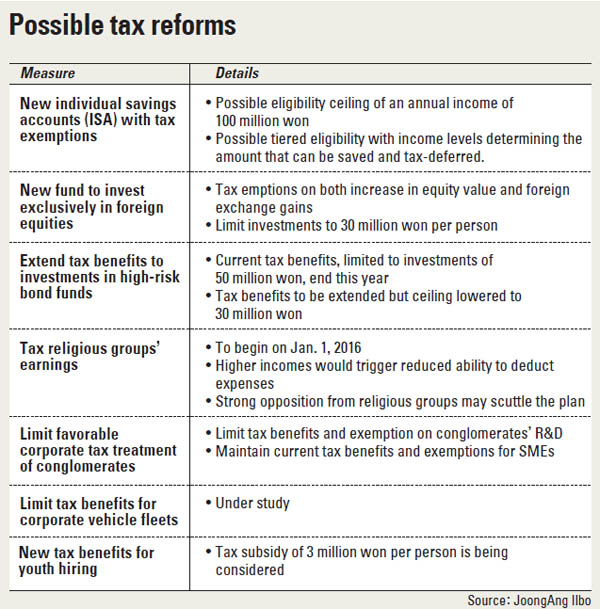 The government plans to announce its tax reforms for this year early next month. One of the changes it is looking into is the implementation of an individual savings account (ISA), a multipurpose account that allows savers to invest in many different types of assets, such as mutual funds or bonds, in a single account. The government says for most people, taxation of earnings in these accounts will be deferred until they are cashed in.

The Ministry of Strategy and Finance is now settling the details of the new accounts, including who is eligible to open one and how much in earnings will be tax-exempt.

One of the proposals under study is an income ceiling on eligibility, perhaps at 100 million won ($86,600). Another is to allow all income earners to open such an account, but sharply limit the tax benefits available to high-income earners.

Choi Won-seok, a professor at University of Seoul, said that because the purpose of such accounts is to encourage people to save more, it would be better to be generous with the limits on income to attract more subscribers.

The government is also considering a fund that would invest exclusively in foreign equities. Tax deferrals would not only be available for investment profits, but also for gains from foreign exchange movements. The fund would reportedly be capped at 30 million won per account.

Other tax changes under consideration include an extension of the favorable tax treatment of high-risk bond funds. Those tax benefits will end on Dec. 31 without any action to continue them.

At present, the tax breaks are available for investments of as much as 50 million won per person; that ceiling could be reduced if the current tax rules are extended.

Other tax cuts and exemptions that have been given to conglomerates are expected to be revised in this year’s changes. Opposition parties have been demanding that the government raise the corporate tax, but the finance minister has resisted those calls, and says that a tightening of tax loopholes would be a more effective way to proceed. He told the Assembly on July 15 that the result would be more tax receipts from the nation’s largest business groups.

The government estimates tax reductions to conglomerates connected with the hiring of research and development staff to be 3.6 trillion won; reductions to encourage temporary hiring will amount to another 917 billion won. More than 60 percent of those tax rebates are pocketed by conglomerates with annual revenue of more than 500 billion won.

“The Korean government’s fiscal and tax support of R&D compared to the country’s GDP is one of the highest in the world,” said Jeon Byung-mok, a professor at the Korea Development Institute’s School of Public Policy and Management. “The tax benefits provided to businesses should be changed from quantity to quality. Tax cuts should be made not only on R&D investment but on performance and results.”

But Ahn Chang-nam of Kangnam University says reductions of tax breaks would do nothing but shrink such investments. He added, “The fact that the tax benefits are given mostly to conglomerates is an issue that needs to be solved, but the purpose of R&D investment is to generate future profits and future business.”

The government is also looking at taxing religious groups, which could spark a huge controversy. A year ago, the government tried to levy income taxes on such groups but faced strong opposition. The administration accepted a National Assembly proposal to defer the idea for a year. Still, with a legislative election on tap for 2016, there may be even less enthusiasm for the idea this year than there was in 2014.

The government is also considering changes to tax benefits for the purchase of vehicles for corporate use, complaining that many company cars are used for personal purposes.