Third ‘Sharknado’ is a flop

Third ‘Sharknado’ is a flop 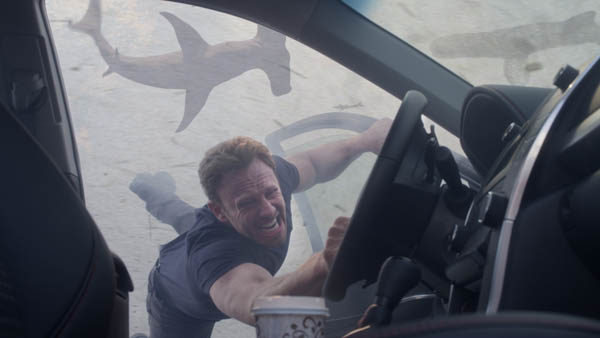 NEW YORK - The pun is as fitting as it is inevitable, so let’s go ahead and get it out of the way: “Sharknado 3’’ has definitely jumped the shark.

It airs Wednesday at 9 p.m. EDT on Syfy as the latest in what, before now, was settling into a much-anticipated summer TV rite.

Two years ago, the original “Sharknado’’ film depicted a weather aberration on the Southern California coast that caused bloodthirsty sharks to cascade on hapless Angelenos. But hunky beach-bar owner Fin Shepard (get it?) saved the day with a makeshift shark explosion. Both as cinema and marine biology, “Sharknado’’ was gleefully idiotic while sinking its teeth in the funny bones of every viewer in its path. A horror-spoof franchise was born.

For last summer’s emphatically titled sequel, “Sharknado 2: The Second One,’’ Fin was back. Again played by “Beverly Hills, 90210’’ alum Ian Ziering, he headed to New York for quiet post-sharknado repose with his beloved, April (Tara Reid). But an even bigger, badder sharknado storm awaited him in the Big Apple, where he rallied take-no-guff New Yawkers in a feisty counterstrike. “Sharknado 2’’ was a hilarious treat.

First problem: The story centers on a bigger-than-ever shark attack along the entire east coast. This sounds epic in theory, but in practice only waters down the action, with Washington quickly left in ruins before the mayhem shifts to South Florida and points in between.

Another problem: The film forgot to be funny. Perhaps the most clever touch lampoons the through-the-gun-barrel point-of-view with which every James Bond film begins (though here, it’s through the gaping jaws of a shark), but that gag is over in the film’s opening seconds.

As with its predecessors, the film is chock-full of odd-ball guest roles and cameos.

Mark Cuban is frighteningly credible as the president, with Ann Coulter his vice president. Frankie Muniz is on hand, trying for and failing at a comeback. (He used to be so CUTE!)

The biggest shortcoming: The film and its story seem to have been cobbled together not to entertain the audience, but to serve the varied interests of Syfy owner Comcast as a multi-pronged marketing assault.

As before, this film heavily promotes Syfy sister network NBC. The sharknado siege is “covered’’ by NBC News personalities Matt Lauer, Savannah Guthrie and Al Roker. This was funny before, but feels uncomfortable now as NBC News struggles to restore its credibility after Brian Williams’ story-fudging fiasco. Maybe NBC News stars should try keeping a safe distance from fish tales.

Unlike the first “Sharknado’’ film, which attacked without warning, and the second, an instant campy classic, this third outing is being hyped as a major television event. Far from it. It’s product-placement chum. Don’t take the bait.
AP