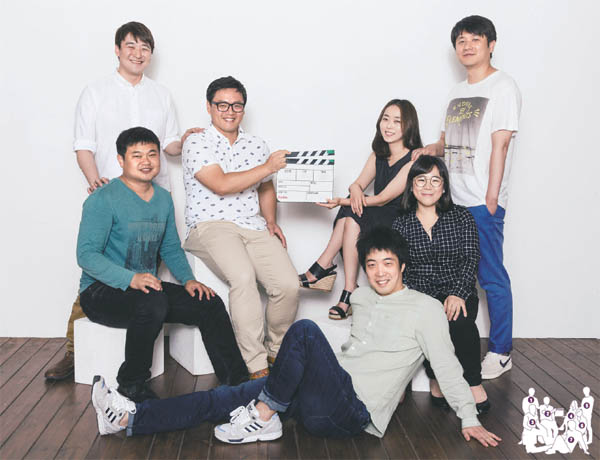 What happens when a group of 30-somethings with a passion for movies - and talent - form an alliance?

Gwanghwamun Cinema, which is exactly that, has been making creative movies and breathing new, fresh breath into the stagnant Korean film industry.

The creatives - who are currently working on their third film, “Queen of Crime” (working title) - all gathered for this interview. As they posed for the photo, they joked that it was their first “family” portrait.

The members of Gwanghwamun Cinema have certainly known each other for some time now.

Apart from Kim Ji-hun, who studied German language and literature, the rest have an academic background in film and are all alumni of the graduate school of visual arts at the Korea National University of Arts.

Gwanghwamun Cinema began as friends, who share interests and experiences, sought to help each other. Kim Tae-gon wrote a screenplay in 2012 for “Sunshine Boys” based on his personal experience. Kim needed help turning the screenplay into an actual film, and his friends Jeon Go-un and U Moon-gi came to the rescue.

They rented a small space in an old, shabby building in Gye-dong, central Seoul, and called it their workplace. From here and there, they collected 10 million won and made the film in just two weeks.

Thus began Gwanghwamun Cinema. And they say they only launched it as a business entity because they needed a company registration certificate to present their work at film festivals.

“We used the word Gwanghwamun because we did a lot of work at director Jeon’s place near Gwanghwamun [before renting a space in Gye-dong],” Kim Tae-gon said. “It’s a very rudimentary naming principle, like the pigs’ feet [dishes] in Jangchung-dong [central Seoul]. 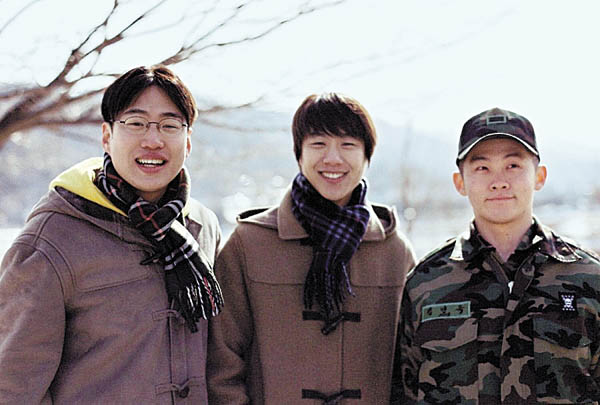 But the film, about two young men visiting their friend who is serving in the Army, is considered quite a success. The film portrays the struggles of today’s youth and it was invited to be screened at the Busan International Film Festival in 2012. The three actors in the film received awards, and the film also clinched the screenplay award.

One by one more friends joined and that’s how Gwanghwamun Cinema came to be “the seven.” Though the group of creatives did not attach a lot of meaning to its growth.

“We didn’t welcome a new member based on our philosophy or vision or anything,” U said jokingly. “One more member meant less money from my pockets on the rent. So why not?”

But Kim Tae-gon added that “because I got a lot of help from my friends for my debut piece, I also wanted to help others debut.” 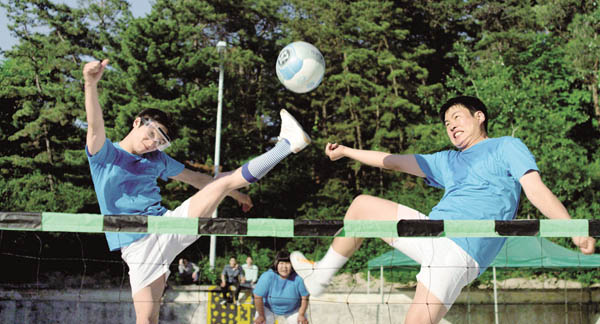 Person A would take on the role of director for his or her film, and the rest would step in to play roles such as producer, casting director, production crew members and more. Then they would do the same for Person B’s film, and so on.

Their workplace is small and cannot even fit five desks. But the seven work many nights, racking their brains trying to come up with fresh ideas.

“The preproduction part is hard and lonely, but having these people around really helps,” Jeon said. “You exchange ideas, get feedback and add stuff - and voila, you have the screenplay.”

“The King of Jokgu” is also the fruit of such hard work. The film, which is about a male college student who returns after serving two years in the military, is directed by U but written by Kim Tae-gon.

“While we were having a drink, I told U that I have an idea for a film where a returning student, who at first has a hard time adjusting, ends up leading the campus social life through jokgu [foot volleyball],” Kim Tae-gon recollected. “U said without hesitation that he wanted to direct the film. He bought dakbal [chicken feet], which I guess was the contract,” he laughed.

“The King of Jokgu” is critically acclaimed for portraying the hopelessness and reality the Korean youth faces, but in a witty and lighthearted manner. It in fact amassed 45,000 ticket sales, which is not a bad total for such a young team. It also won an audience award at the Jeongdongjin Independent Film Festival and the emerging director’s award at the Chunsa Film Festival.

“We made the film with 50 million won, thanks to the actors who agreed to get paid only a limited amount,” Kim Ji-hun, who also took part in the film, said. “But just like our first movie, its profit rate was more than 300 percent.”

The film they are currently working on, “Queen of Crime,” is unlike their previous works in that its production budget is 400 million won - 40 times the budget of their first movie. How did this happen?

Panda Media, an affiliate of major investor-distributor NEW, is the main investor for “Queen of Crime.”

“For ‘The King of Jokgu,’ we gave shares to the actors instead of actual money,” Kwon noted. “So it felt so different making ‘Queen of Crime.’?”

The film seeks to be a comic thriller. It’s about a guy who’s living in a gosiwon, tiny one-room apartments mostly for students, and struggling to pay utility fees. The guy asks his mother for help. She comes all the way to Seoul to help, but somehow finds herself embroiled in a murder along the way.

Lee Yo-seob, who is directing the film, said he got to direct “because Kim Tae-gon and U Moon-gi got good results with ‘The King of Jokgu,’?” adding that he hopes the film is a success and makes his wife, who happens to be Jeon of the gang, happy.

But Jeon has a full plate, too. She will be directing Gwanghwamun Cinema’s fourth film, “Sogongnyeo” (working title). It’s also about the struggles of an average Korean: a part-time maid in her mid-30s whose few pleasures in life are smoking and drinking. Soaring rent prices and a hike in cigarette prices make her wander around, searching for a new meaning in life.

By now, one should be able to see a common denominator in the films of the group: They honestly portray the average Korean youth who struggle with the harshness of reality.

“We didn’t really intend it,” Kim Bo-hee said. “But somehow they all ended up with that common thread. I guess it happened to be that way because we always intended to interact with our audience, who are mostly in their 20s and 30s.”

A signature of Gwanghwamun Cinema is that they insert a scene at the end of every movie they make that’s like a sneak peak - or a mini trailer - of their next movie.

For instance, one of the final scenes in “Sunshine Boys” shows a student playing jokgu, and at one of the closing scenes in “The King of Jokgu” depicts a guy pleading with his mom to help him pay the utility fees for his gosiwon.

“Such scenes are a promise to the audience that we will make our future films [on such subjects],” Kim Tae-gon said, “and there have been cases when distributors approached us based on such scenes [for our upcoming films]. It has somewhat become our tradition now.”

And the members of the gang now have individual gigs, too: commissioned works by major investor-distributors.

An official at CJ E&M said it expects that “Kwon’s detail-oriented directing will stand out [in the piece].”

Currently, there is a notion in the Korean movie industry that if any member of Gwanghwamun Cinema is involved, there will be something new and different. But even with such expectations, the members said they don’t really feel any pressure.

“We still consider ourselves a school club on filmmaking,” Kim said with a laugh, adding that the members consider themselves more of a family rather than a film production company.

“Our commercial films that we work on individually [with other distributors] may fail, but we can always come back and make films,” U said. “That’s what we want to be to each other, like a home and shelter.”

They say the whole reason they’re together is because they just love movies and that won’t change.

“Regardless of results like attendance numbers or ticket sales, our hope is to continue to make films we really want to make and along the way have drinks and laugh together,” Kim Bo-hee said. “In fact, those are the happiest moments.”