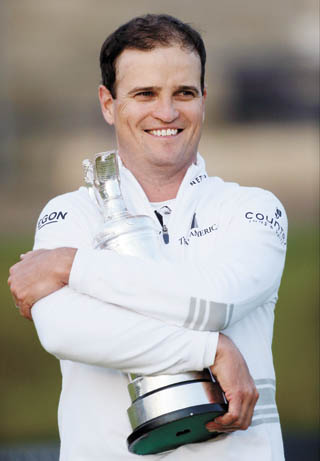 Zach Johnson holds the trophy after winning the British Open at the Old Course in St. Andrews, Scotland, on Monday. [AP/NEWSIS]

ST. ANDREWS, Scotland - Jordan Spieth’s spirited bid for a Grand Slam was stopped Monday by Zach Johnson, who is no longer just a normal guy from Iowa. Not with a claret jug to go with that green jacket.

Johnson captured his second major, this one at the home of golf, winning the British Open in a playoff over Louis Oosthuizen and Marc Leishman that capped five wild days here.

Most eyes were on 21-year-old Spieth. No one ever came closer to the third leg of the Grand Slam. He fought back from a four-putt and a double bogey on No. 8 with back-to-back birdies. He rolled in a 50-foot birdie putt for a share of the lead with two holes to play. After missing an 8-foot par putt on the 17th hole, he needed a birdie on the closing hole to join the playoff.

“Up and down for a playoff,’’ Spieth said to caddie Michael Greller when he was about 90 yards away. It was too far right and rolled to the edge of the Valley of Sin short of the green, and his birdie attempt up the slope stayed inches left of the cup.

He joined Arnold Palmer, Jack Nicklaus and Tiger Woods, the three biggest names in golf over the last half-century, as the only players to capture the Masters and U.S. Open only to come up short in a quest for the holy grail in golf - all four professional majors in the same year.

Johnson, 39, won the Masters in 2007 and described himself as just a normal guy from Cedar Rapids, Iowa. Not anymore. He now has two majors among his 12 PGA Tour victories, showing that a good wedge game and putter can still go a long way in this era of the long ball. He was in tears when he was interviewed off the green. “I’m grateful. I’m humbled. I’m honored,’’ Johnson said. “This is the birthplace of the game, and that jug means so much in sports.’’

On an afternoon of shadows and showers on the Old Course, Johnson closed with a 6-under 66, holing a 30-foot birdie putt on the 18th hole in regulation. He was the first to post at 15-under 273.

Leishman, who considered giving up golf in April when his wife nearly died of a rare illness, had a bad swing in the closing holes that cost him a bogey on the 16th hole to fall into a share of the lead with Johnson. His birdie putt for the win stayed wide left.

After Spieth had to settle for par and a 69 to tie for fourth, Oosthuizen made a 10-foot par putt on the Road Hole, No. 17 to stay a shot behind, and he delivered a clutch moment of his own with a wedge to 5 feet for birdie and a 69 to join the playoff.

It was the first British Open playoff since Stewart Cink beat Tom Watson at Turnberry in 2009, and the first involving more than two players since 2002 at Muirfield, the year Woods failed in his bid for the third leg of the slam.

Spieth showed guts on the course and class when his bid failed. He walked off the 18th green applauding the fans, stayed to watch the closing hole in the playoff and came back onto the course to hug Johnson.

Just two weeks ago, he went to Iowa to take part in a charity event for Johnson before playing, and winning, the John Deere Classic in a playoff for his fourth win of the year. He was questioned for not preparing at St. Andrews for a rare chance at a Grand Slam, but put that notion to rest with a performance that kept him near the lead all week.

It was the first British Open to end on Monday since 1988, because of a rain delay Friday and a wind delay on Saturday. But what a show. AP