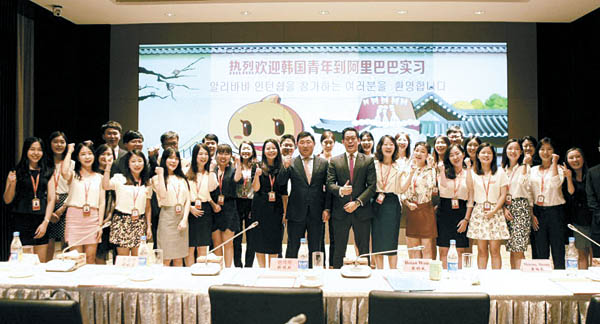 Twenty Korean college students have begun internships at Alibaba in fields such as marketing, customer service and business development at the world’s largest e-commerce company.

The Korea International Trade Association said Tuesday that the students are the first group of interns from here at Alibaba as part of Korean-Chinese cooperation to foster e-commerce talent. They will be learning and working at the Hangzhou-based Alibaba headquarters for nine weeks.

This exchange is part of an economic cooperation program agreed on by Finance Minister Choi Kyung-hwan and Alibaba Group CEO Jack Ma when Choi visited Alibaba earlier this year. Choi asked for Ma to increase his company’s business with Korean manufacturers and retailers and specifically asked for internships to give promising Koreans exposure to other countries’ markets.

Before leaving home, the students received a grounding in the e-commerce industry in China. They arrived in Hangzhou on July 13, spending their first five days at Alibaba’s internal Taobao University to learn about product positioning and marketing strategies in online shopping malls, online mall design, and business strategies in starting online malls.

After the nine-week internship, the 20 students will be evaluated for permanent jobs with the group.

The Korean association, a partner in this project, said it planned to pick another group of college students for Alibaba internships in the second half.