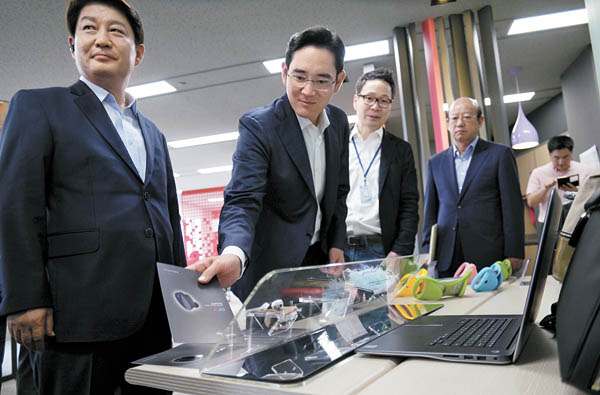 Samsung Electronics Vice Chairman Jay Y. Lee, second from left, looking at some of the products on display at the company’s creative innovation center in Daegu on Tuesday. [NEWSIS]

Jay Y. Lee, vice chairman of Samsung Electronics, visited the center for creative economy and innovation in Gumi, North Gyeongsang, on Tuesday, seven months after the center, jointly run by the government and Samsung, was launched.

He was appearing in public for the first time since he strengthened his control over the Samsung Group last Friday, when shareholders approved a disputed merger between Samsung C&T and Cheil Industries over the objections of a U.S. hedge fund.

On his second trip to the center, the Samsung heir-apparent discussed with workers the progress in a chain of new businesses spearheaded by the center - smart factories, renovated traditional Korean houses and agricultural innovations.

To boost the local economy through innovative and creative ideas and businesses, the Park Geun-hye administration, since last year, has pressed conglomerates and other large companies to invest in these centers dotted around the country. Eighteen, including the one in Gumi, have opened so far.

Samsung committed 30 billion won ($26 million) to the North Gyeongsang innovation center to use technology to lift the region’s traditional manufacturing and agricultural industries.

According to Samsung, the “C Lab,” an incubator at the Daegu center, produced 18 new start-ups in late June, funded by 1.74 billion won that the conglomerate contributed to the center. A second batch of 19 teams trying to launch their own start-ups are now working with Samsung employees as their mentors.