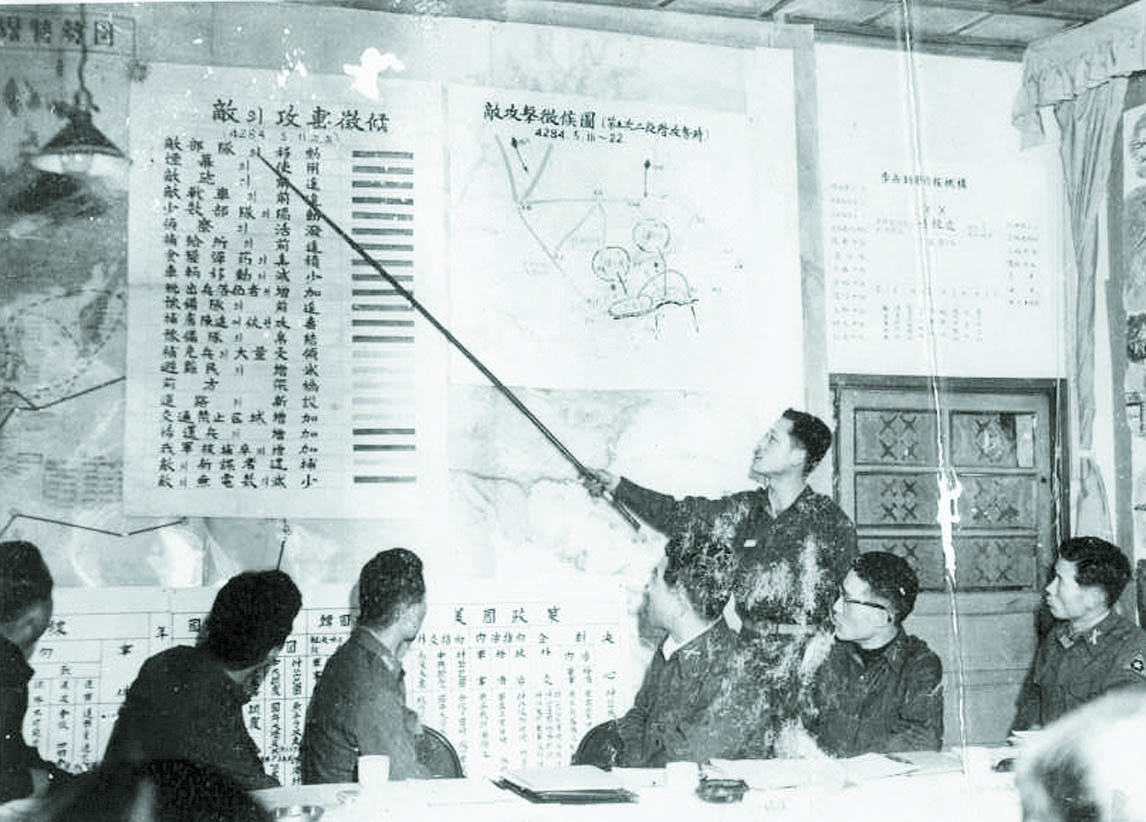 Kim Jong-pil, a captain at the time, provides a briefing on the enemy attack in 1951, in the situation room at the Army Headquarters. Kim worked in the headquarters’ intelligence department from June 1949. [The former Prime Minister’s Office of Kim Jong-pil, JoongAng photo]

“Our base is being attacked by enemy shells. We are under attack! Tanks are pushing down.”

It was around 3 a.m. on June 25, 1950, when I picked up the phone at the intelligence department of the Army Headquarters, and an intelligence officer from the 7th Division in Uijeongbu made this hurried report. It’s been 65 years, but I can still vividly recall the urgency in his voice. It was the beginning of the North Korean invasion, the Korean War.

I was a lieutenant in charge of North Korean affairs at the Army Headquarters. On Saturday, June 24, I volunteered for night duty in place of South Korean affairs officer Lieutenant Seo Jeong-sun because I had a premonition that my fears were imminent. 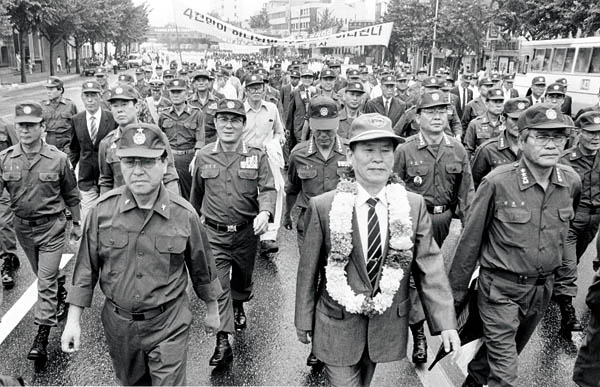 Kim Jong-pil, front left, then a supreme council member in the Democratic Republican Party, marches in Seoul on the 40th anniversary of the 1950-53 Korean War on June 25, 1990, as a brigadier general.

Six months ahead of the North’s invasion, the Army Headquarters’ intelligence department made a comprehensive report on the movements of North Korean forces. Park Chung Hee, working temporarily as a civil servant at the time, led the project.

He initially suggested making the comprehensive report, arguing that the North Korean forces were exhibiting worrisome movements, and South Korean affairs officer Lieutenant Lee Yeong-geun and I joined in on the project. I collected military intelligence on North Korea and Lee analyzed the North’s guerilla forces in the South.

Park performed an overall assessment and was in charge of the decision-making.

The report was destroyed during the war, but I still remember the content.

“It’s certain that the enemy will initiate its attack in March 1950. But it may be delayed to June if the Korean Voluntary Army [KVA] in China is not transferred to the North Korean People’sArmy [KPA] soon enough.

“The enemy will position more than three divisions, including tank divisions, for its main attack through the Dongducheon-Uijeongbu-Seoul axis. One or two divisions will be deployed respectively on the Kaesong-Paju-Seoul axis and Chuncheon-Wonju-Pyeongtaek axis in a supplementary attack. The 766 unit, under training in North Hamgyeong Province in North Korea, will be dispatched to our rear on maritime vessels.”

“In an attempt to claim all South Korean territory, the enemy will send all its forces over only two to three months. The number of soldiers in the early stages will be 120,000, and about 200,000 will be deployed after seizing Seoul.”

“The enemy’s tank divisions will be major threats to friendly forces, and aircraft will cover ground forces from the air. The Soviet Union will not likely intervene directly, but the Chinese Army may directly support North Korea.”

As a senior officer in the North Korean affairs department, I could even memorize the number of platoons in each of the three North Korean guard divisions at the 38th parallel. But when it came to analyzing the enemy’s route of invasion, Park was second to none.

As far as I observed in preparing the report, Park’s thoughts were organized and precise.

He once drew arrows on the map and said, “I suppose the main attack is here along the Dongducheon-Uijeongbu-Seoul axis, first supporting attack here from Paju and second supporting attack from Chuncheon. What do you think?”

I couldn’t think of anything else.

The report was handed over to Army Chief of Staff General Chae Byeong-deok as well as the defense minister and the U.S. Korean Military Advisory Group.

But South Korea’s military leadership didn’t believe it and denounced the report as groundless.

“We will be able to push toward Sinuiju in a week if we invade the North,” Chae even said.

However, our hunch was right. The KVA was transferred to Sariwon in North Korea’s Hwanghae Province in May 1950, to the KPA’s 6th Division. In June, three guard divisions on the 38th parallel withdrew and the main forces in the KPA gathered along the frontline.

Intelligence agents at more than 10 posts there warned of an imminent North Korean attack.

Around 10 a.m. on June 24, I asked Colonel Chang Do-young to gather military staff since North Korea’s attack appeared imminent. I explained to five Army officials that the enemy was likely to initiate its invasion on Sunday, on June 25, insisting that the entire military must take an emergency posture as soon as possible. But nobody took me seriously, claiming there was no evidence, and they left.

On Saturday afternoon at the Army Headquarters in central Seoul, it looked like the calm before the storm. I ordered each intelligence post to report every hour. High-ranking officials were celebrating the opening of an entertainment facility for military officers, and later that day, a torrential rain hit the 38th parallel and came down to Seoul in the night.

My worries grew as time went by.

The attack began at 3 a.m. on June 25. The first report was from Pocheon’s intelligence post, which said that enemy forces are attacking from Manse Bridge in Yangmun-ri.

The enemy’s ambush was a success. Six infantry divisions, 200 aircraft, 200 tanks and 2,000-some artilleries were pushing down on the 38th parallel. The enemy forces were much bigger than ours. Our military leaders did not give an emergency alert until 7 a.m. that day, and officials from the Army Headquarters reassembled after 2 p.m.

We couldn’t even resist properly. KPA soldiers poured in, and Seoul was put at stake in just three days. Army Chief of Staff Chae called me at 9 a.m. and handed me over a sealed envelope, ordering me to give it to 7th Division Chief Yu Jae-hung, who was defending Chang-dong, in northeastern Seoul, for an answer. The letter asked him how long the soldiers at Chang-dong could stand. I hopped on a military jeep.

Driving the vehicle between artillery attacks, I shouted, “Shoot, if you are going to kill me! Drop it right above my head!”

Most soldiers there were running from the KPA. The 7th Division was crumbling and I couldn’t even find Yu, so I met Staff Chief Kim Jong-gab.

“It’s hard to hold up even tonight,” he told me.

As I went over to Jeongreung, liaison officer Col. Lee Yong-mun said: “We may not be able to stand until tomorrow morning.”

From there, I could see the KPA soldiers coming down from the mountain in the north.

After returning to the headquarters, I reported what I saw to General Chae.

“OK,” he said, giving me a pack of Lucky Strikes with his trembling hands.

Our military leaders quickly dispatched Army cadets, who hadn’t even finished military training, to the frontline. Lieutenant Lee Heon-yeong, who was best among us at the Korea Military Academy, was one of their instructors at the time.

He led the cadets into battle in Uijeongbu and was killed in action on June 27.

The best of us died first.

I witnessed this in the first three days of the war. People say the North ambushed the South, but to be exact, our military leaders invited the disaster because they weren’t prepared.