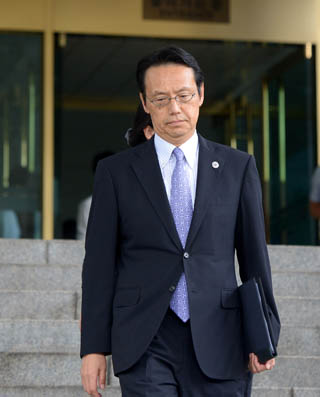 The Korean government Tuesday lodged a strong protest with Tokyo after it published defense white papers repeating its claim over Korea’s Dokdo islets in the East Sea for the 11th year in a row, accusing Japan of denying its imperialist past.

Ministry of Foreign Affairs spokesman Noh Kwang-il in a briefing Tuesday said the Japanese government’s claims in its 2015 defense white paper “is an act denying Japan’s imperialism and invasion of the Korean Peninsula, and it is the same as the Japanese government demonstrating to the international society that it does not have a correct understanding of history even to the point that we mark the 70th anniversary [of the end of World War II].”

Japan began including Dokdo as its territory in its annual defense report in 2005 under Prime Minister Junichiro Koizumi.

In the report submitted to the Cabinet on Tuesday, a map of Japan’s air defense identification zone (ADIZ) and important military units shows Takeshima, Tokyo’s name for Dokdo, as Japanese territory. While the map shows Dokdo as falling under Korea’s ADIZ, a separate circle around the islets indicates it as Japanese territory. The paper says the territorial issue over its “sovereign territory of the Northern Territories and Takeshima still remains unresolved.”

The inclusion was similar to last year’s.

“Such provocations from the Japanese government as we mark the 50th anniversary of the normalization of bilateral ties invalidate our efforts to open a new future,” Noh added.

Korea maintains that Dokdo, which it has administrative control over, is an integral part of its territory historically, geographically and under international law.

The Defense and Foreign Affairs ministries lodged separate formal complaints about the white papers, summoning officials from the Japanese Embassy in Seoul on Tuesday.

The Defense Ministry summoned Col. Nobuhisa Goto, a defense official at the Japanese Embassy in Seoul. Later that day, the Foreign Ministry summoned Kenji Kanasugi, the deputy chief of mission at the Japanese Embassy. In a statement, the Defense Ministry strongly condemned the white paper and said it would “take firm measures against any attempts to challenge Dokdo being our territory.”