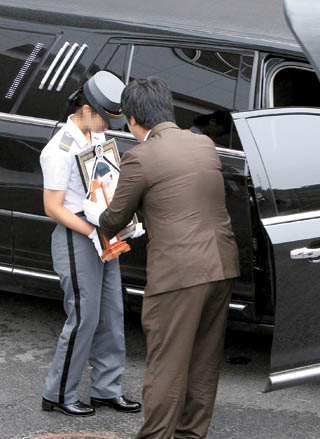 The eldest daughter of the late NIS official carries her father’s portrait into a hearse on Tuesday at a funeral parlor in Yongin, Gyeonggi, as the funeral procession is about to depart. By Cho Mun-gyu

What drove a dedicated 45-year-old cybersecurity agent of the National Intelligence Service (NIS) to take his own life is being debated between the ruling and opposition parties, amid an ongoing controversy over whether he helped the spy agency monitor ordinary South Koreans during the 2012 presidential election campaign.

Opposition New Politics Alliance for Democracy (NPAD) lawmakers raised concerns that the NIS official surnamed Yim, who was found asphyxiated in his car on Saturday, underwent intense questioning by the agency the day before he died.

On Monday, media outlets including Hankyoreh and JoongAng Ilbo, an affiliate of the Korea JoongAng Daily, reported that Yim underwent questioning ahead of his death. They quoted intelligence sources.

He was reportedly due for more questioning on the morning that he took his life.

NPAD Rep. Park Jie-won of the National Assembly’s Intelligence, Security and Public Administration Committee said, “Media reports show that Yim underwent intense questioning the day before he died, and even on the day he died, he was summoned [by the NIS] for further questioning but did not go. It was then that they called his home and his family realized he was missing.”

However, ruling Saenuri Party lawmakers denied that Yim underwent an intense internal interrogation by the NIS, along with accusations that the NIS spied on ordinary Koreans with Italian hacking software it bought in 2012.

Saenuri lawmaker Rep. Lee Cheol-woo, secretary of the intelligence committee said, “After confirming with the NIS, they said they only asked him a few questions over the phone.” He added that Yim could have felt pressure from phone calls from NIS officials, “but it’s not like he was called in for an intense interrogation.”

Yim was a cybersecurity expert who had worked with the NIS for 20 years.

He was in charge of purchasing and operating remote control system (RCS) software that the NIS admitted last week to furtively purchasing from Italian surveillance malware vendor Hacking Team in 2012. The NIS is facing accusations that it used the programs to monitor South Korean citizens especially during elections, allegations the top spy agency denies.

Yim had a wife and two daughters and reportedly did not have any underlying psychological issues.

However, he was found dead in his car on an isolated hillside in Cheoin District, Yongin, Gyeonggi, on Saturday. Yongin police concluded he had committed suicide by burning charcoal and two beongaetan, which are used to ignite barbecue charcoal.

He left behind a three-page, handwritten suicide note denying that the NIS monitored ordinary South Koreans with the software or used the programs for election-related spying. He went on to admit that he deleted material from NIS records that could “cause misunderstandings related to counterterrorism and North Korea operations.”

According to National Assembly intelligence committee lawmakers, Yim was not involved in gathering information on North Korea.

They said that when a department in the NIS decided on a target for surveillance, Yim would operate the hacking programs on the target.

The programs could penetrate both computers and mobile devices.

Rep. Lee Cheol-woo told reporters on Monday, “He was not somebody who decided upon who would be monitored. He was a technician, someone who would be told who the target was and would be involved in the technical aspects,” such as planting the malware in the target’s emails. “It seems that he was worried that such information would become public.”

Yim was found dead the day after the NIS said it would disclose details about the RCS software operations.

The Saenuri and NPAD floor leaders held a meeting on Tuesday to discuss the hacking allegations, after the ruling party emphasized that the issue of security and privacy is a bipartisan one. What sort of material Yim deleted from NIS records is being hotly debated. The NIS said the material is completely retrievable.

Intelligence committee lawmakers of the ruling party said the deleted material includes North Korean targets and individuals related to North Korea operations, as well as terrorist suspects. It is also said to include identities of agents who are in charge of overseeing North Korea and terrorist activities and their motives, as well as some NIS contacts and IP addresses related to those targets.

Software mogul-turned politician Ahn Cheol-soo, who heads an NPAD committee on protecting the public’s privacy, said in a press conference at the National Assembly Tuesday that Yim “deleted files from his past division, not even his current division.”

“This is something that is difficult to understand,” Ahn continued. “If [the NIS] was a proper governmental agency, something like this could not happen… Usually, government agencies should not let working-level officials delete files.” Ahn added that he plans to request 30 documents in seven fields from the NIS, SK Telecom and the parliamentary communications committee in regards to the purchase and operation of the Italian hacking programs and Yim’s death. He said he would also request access to the deleted material once it is retrieved.

Amid the ongoing mystery surrounding Yim’s suicide, his funeral procession took place Tuesday morning and was attended by some 200 relatives, friends and colleagues. He was laid to rest at the Yongin Forest of Tranquility in Cheoin District.

His mother, in tears, said, “I miss you, my youngest child. Your mother wants to follow you. What can we do about our poor youngest child?”