Korea struggles with a one-child preference

Korea struggles with a one-child preference 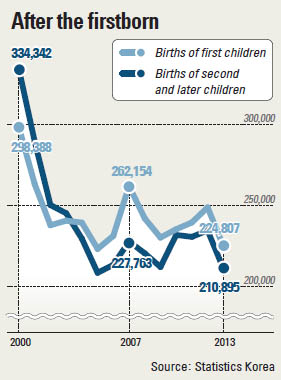 Mrs. Choi, a 35-year-old working mother with a three-year-old daughter, is often asked when she and her husband will have a second child. It’s not a question Choi enjoys answering because her first child brought so many challenges.

She felt she let down her company when she took maternity leave for the birth of her daughter. And when she returned to work, she didn’t know what to do with her daughter during the day. She doesn’t trust day care centers after reports of child abuse.

She had no choice but to ask her mother, who was running a restaurant, to help. The mother shut down the restaurant.

“We can’t afford our rent unless both my husband and I work,” Choi said. “How can I ask my mother to take care of two toddlers on her own?

“I’m not having a second child, but it’s not because that’s my choice. I simply can’t.”

The shrinking and graying population is one of Korea’s biggest challenges. To deal with low fertility rate, which has been an issue for over a decade, the government mainly focused on childcare policies rather than other aspects, like encouraging more people to marry.

And yet, the rate of births of first children continues to decline, and that of second or later children even more so.

The number of second or later babies is considered a barometer of the country’s childcare environment because some married couples want a first child no matter what. But when they decide to have more, they consider the practical considerations more carefully.

The gist of the country’s childcare policies is so-called “free day care,” which was initiated in 2006 by the Roh Moo-hyun government to help couples with kids, particularly couples in which both parents worked. These policies were very effective in increasing the number of day care centers, although the quality of the care was uneven.

In the meantime, the number of children taken care of at these facilities also more than doubled from 680,000 to 1.5 million during the same period. With such a sudden increase, there wasn’t enough time, or a proper system, to filter out unqualified teachers or managers.

Parents sometimes choose to employ babysitters to avoid day care centers, but at a price.

“We have to pay the sitter 1.9 million won ($1,648) a month plus bonuses, and another 900,000 won for the kindergarten tuition,” said a 38-year-old employee of a financial company, who hired a full-time babysitter for her 7-year-old daughter. “My husband and I earn more than 100 million won a year, but we aren’t able to save much.”

The Ministry of Gender Equality and Family has a project in which the ministry hires and sends baby-sitters to families.

The rate it charges differs depending on the families’ incomes. But it hasn’t been popular among mothers.

Only 54,000 households benefitted from the project last year and only 4,373 used full-time baby-sitters partly paid for by the ministry.

Educational expenses are a big consideration when having additional children.

“I have no choice but to spend money on cram schools because every other family does the same,” said Mr. Choi, a company employee. “It’s not strange to see parents in Gangnam spending 1 million won a month for a kindergartner’s cram schools and it gets worse when the child goes to middle or high school.

“Given the educational expenses,” he said, “I need to have only one child to concentrate on.”

The fundamental solution is quality day care centers that parents can trust. Some analysts say this would require an overhaul of the free day care system to allow parents to pay more for better quality - a free market solution.

Currently, the government pays all the costs of day care centers for children under the age of three. Each center may collect special activity expenses but local governments set limitations on those. That promise of free day care for kids under the age of three, coupled with the costs of the Nuri program, which provides free education to 3- to 5-year-olds, has stretched the limitations of local governments - and almost guaranteed a very uneven quality of care.

“The crude quality of day care facilities derives from the government’s free day care policy,” said Kim Dong-won, a visiting professor of economics at Korea University. “We need to break out of such an illusion.”

“If the government tries to take care of everything, it will only undermine the quality of day care services,” said Lee Sang-bin, a professor of finance at Hanyang University’s School of Business. “The quality of services will improve on both sides if it spends more for those in the lower income brackets, not for everyone.”

Some other alternatives have been suggested as well. One of them is to set up nurseries at workplaces. From 2017, companies with more than 500 full-time workers or 300 female workers are obligated to set up workplace day care centers.

If the government can’t increase the number of public day care centers, it can induce companies to establish nurseries by giving more benefits, such as tax breaks, analysts say.

Analysts are also proposing a wider government-led babysitter system, in which the government not only qualifies nannies but also brokers them with proper families. That would benefit both sides because babysitters could easily get jobs and families could trust them.

In Korea, most babysitters are Korean-Chinese people, but there isn’t any kind of qualification system. Full-time nannies are getting 1.5 to 1.8 million won a month, but they can easily move to another family if they are paid more.

“Since there are no proper brokers that introduce Korean-Chinese babysitters, the only option we have is to ask friends or family members about nannies,” said a 36-year-old who recently had a child. “If the government qualifies them and standardizes wages, then we would be more relieved and feel safe.”