Forum seeks to promote Korea as a cultural center

Forum seeks to promote Korea as a cultural center 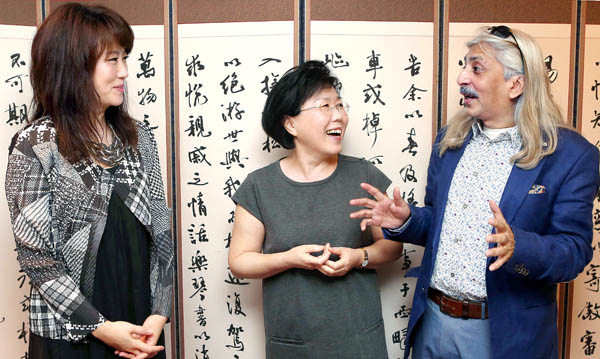 Despite K-pop star Psy’s explosive popularity, Korea is still better known globally for its high-tech industries and conglomerates like Samsung, LG and Hyundai than its culture. Even for cultural expert Sanjoy Roy, “Korea is still a country that has developed rapidly, with the manufacturing sector being in the mainstream, similar to Japan and India.”

The Korean government has been promoting Korean culture by spreading K-pop, K-drama, K-food, K-design and so forth globally, yet it may need to ramp up its effort.

“Cities today across the world are beginning to realize that the next big industry is the arts,” said Roy, a founder of Teamwork Arts, a production house with widespread interests in the performing and visual arts, films and television. He added that Korea should continue to promote its valuable heritage, culture and people. He was visiting Korea last week to organize a festival with Korea. Teamwork Arts, established in 1989, produces 23 annual festivals around the world including the famous Jaipur International Literature Festival in India, the Shared History Festival in South Africa and Eye on India in the United States.

Despite seeing Korea as a manufacturing center, Roy says his current perception of Korea will likely change when he visits Korea again in September for an “emotional experience of its culture.” Roy is one of 14 international culture leaders invited to the Corea Image Communication Institute’s (CICI) annual discussion forum. This year marks the forum’s sixth year and the theme will be “Cultural Combustion in the Smart Age.”

“Of course, we can Google how to make kimchi or how to do the famous ‘Gangnam Style’ dance,” said Roy. “But to really understand Korea and its culture, we have to be here and understand it emotionally. Such emotional experiences are very important.”

Together with other cultural leaders, Roy will visit various spots in Seoul to witness Korea’s traditional and modern culture. The group will tour the Bukchon traditional village, the Hyundai Card Design Library, Gangnam District, the Leeum, Samsung Museum of Art and Changdeok Palace at night, while sampling various Korean dishes at every meal.

“As many of you know, about 17 years ago, Singapore already decided to invest over a billion Singaporean dollars into the arts because they realized that they had to create a city of culture, to imprint the image of the city to foreigners as a city of arts and culture,” said Roy, insisting that government support is indispensable.

Since the theme for the upcoming event is “cultural combustion,” Roy said he believes that “insightful combustion will happen during the event, allowing the participants from across the world to better understand the culture of Korea.”

The cultural forum kicks off Aug. 31 with a two-day tour of Seoul and ends Sept. 2 with a discussion and forum at the Westin Chosun Hotel. According to CICI President Choi Jung-wha, the delegates attending the forum this year include Jean D’Haussonville, director general of Chambard Castle in France; Arina Sharapova, a Russian TV news anchor; Turkish architect Nevzat Sayin; and German newspaper journalist Susanne Koelbl. Jazz vocalist Nah Youn-sun will represent Korea.