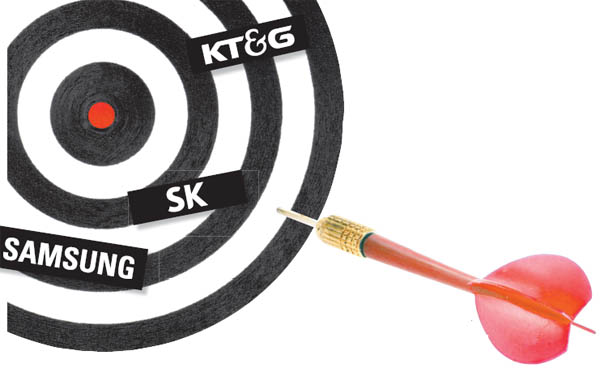 The blistering campaign by the U.S. activist fund Elliott Associates against Samsung to block the merger of the group’s affiliates was an unwelcome surprise to the country’s largest business empire. But the high-stakes corporate drama that ended with a victory by the Lee family invites comparison with the battle that Chey Tae-won, chairman of the SK Group, fought with another aggressive fund 12 years ago.

A subsidiary of Sovereign Asset Management, Crest Securities Limited of Monaco, amassed a 15-percent holding in SK Corporation in 2003. That company was an oil refiner and the de facto holding company of the SK Group. It declared its holdings in April 2003 and said it wanted an active role in management to, in its words, build shareholder value in an underperforming corporation.

Chey had just been indicted for accounting fraud and illicit intra-group share transactions. At about the same time, SK Global, the group’s trading arm that was soon shut down, was secretly dabbling in derivatives and suffered huge losses.

After becoming the single largest shareholder of the SK affiliate, Sovereign began agitating for changes in management, including the resignation of Chey and other board members.

The country’s third-largest conglomerate turned to local shareholders to block Sovereign’s bid in the same way as Samsung did to secure the merger between Samsung C&T and Cheil Industries. SK managed to keep its chairman but it was a costly battle for SK, because Soverign’s moves prompted organizational restructuring that has lasted until today. Two years after the battle, Sovereign sold its entire share in SK Corp. at a profit estimated at 800 billion won ($694 million).

That precedent led the Korean media to come to Samsung’s defense to frame the showdown as a battle between a local company and exploitive foreign capital with malicious intention to thwart the company. Supporters of that view are demanding measures aimed at fending off activist shareholders and hostile mergers and acquisitions. But others say that the sequential attacks by foreign investment funds expose vulnerabilities in the typical chaebol structure, in which the owning family wields control of a sprawling business empire with a small fraction of the shares and exploited a complex network of cross-shareholdings.

Foreign investors can exploit poor corporate governance, and their complaints become even stronger when owners are found committing financial crimes, not an unusual practice in Korea.

That leads some observers to call for the same reforms as foreign activists demand, but for reasons of transparency and good business practices rather than financial gain. Corporations, in this view, should make their murky dealings more open and put shareholder rights and shareholder value as one of their primary aims. 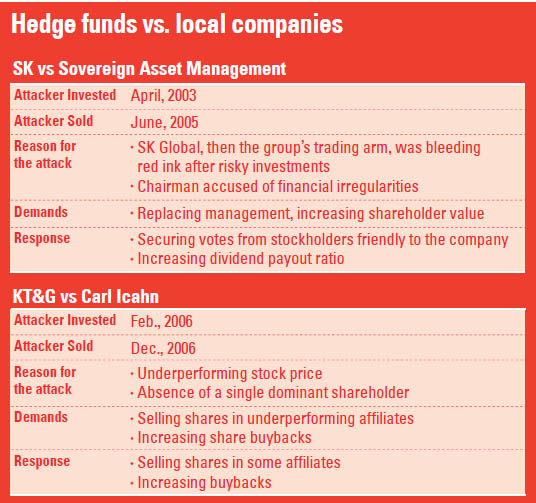 
Executives of large companies in Korea are loath to speak about the regulation of businesses here because of the sensitivity of the issue.

But when Kim Shin, co-CEO of Samsung C&T, was asked about whether big business here should embrace defensive tactics, he told reporters simply, “I totally agree.”

The proxy fight waged by Elliott and the CEO’s remarks reignited debates over whether the government should step in with more regulations, but the debate is being framed as a need to protect Korean firms rather than to force reforms.

Shin Seok-hoon, a researcher at Korea Economic Research Institute, told the Korea JoongAng Daily that the government should use the Samsung-Elliott fight to introduce defensive measures such as “poison pills” or a dual-class shareholder structure.

“Other advanced markets, such as the United States or countries in Europe, have measures so that companies can protect themselves from hostile, unwelcome bids,” the researcher said. “This issue emerges only after companies were affected by foreign hedge fund but never made it into the law.”

A “poison pill” is a strategy that introduces large, unwelcome costs that will have to be borne by a new owner. One method is to offer preferred stock options to existing shareholders that can be exercised to deter aggressors or to take on a crushing debt burden that will make an acquisition financially prohibitive.

Other protective measures are simpler; for example, shares of two different classes, one with voting rights and one without, can be issued. The latter only are for sale to outside shareholders, keeping control in the hands of the voting class shareholders. 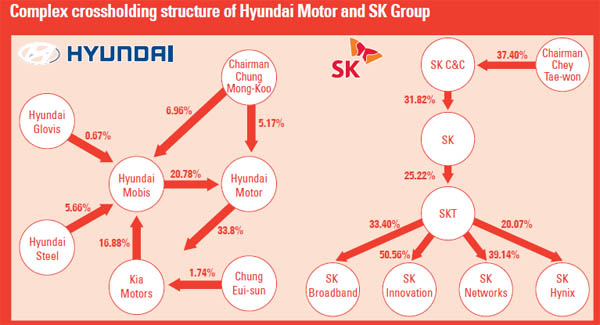 In 2010, a poison pill bill was introduced at the National Assembly but languished there because of “anti-corporate sentiment,” Shin said. He added that the downside of shareholder activism is that shareholders could shake up companies that don’t necessarily need changes. He cited a hostile bid by the U.S. investor Carl Icahn to make changes at KT&G, the country’s largest tobacco and ginseng firm.

“KT&G was, at the time, stable in its corporate governance and the company had received awards from civic groups for its structure.”

Icahn asked KT&G in 2006 to spin off its ginseng unit, sell its non-core assets and increase share buybacks and dividends.

KT&G spend 2 trillion won to meet some of the demands; Icahn earned about a third on his 10-month investment after selling his KT&G shares.

Several forums were held this month to explore the issue, and some law professors were particularly active in advocating defensive strategies. Yun Kang-heum of Yonsei University among them. Media reports say preparations are being made at the Assembly to revive efforts to better arm local companies, although no members of the Assembly have spoken publicly on the matter.

The challenges by Sovereign and Elliott had different targets and were made in different corporate landscapes, but their public campaigns echoed the same theme, complaints of poor corporate governance.

Elliott said Samsung’s generational leadership transfer, the underlying reason for the merger, would be at the expense of Samsung C&T shareholder interests.

Paul E. Singer, the hedge fund manager at Elliott, raised the stakes in the dispute by taking a swipe at Korea’s corporate structure in general.

“We think that this merger ought not to happen as it’s structured,” Singer said last week at the CNBC Institutional Investor Delivering Alpha Conference in New York. “We think it’s also important for the way Korea and Korean corporate governance is perceived in the world.”

He could have been reading from Sovereign’s playbook more than a decade earlier. “Korea’s history of poor corporate governance is undermining its ability to attract the low-cost capital and investment necessary for long term prosperity,” it said in a statement in 2003. “SK Corp. has a unique opportunity to change investor perceptions of Korea and make the country’s aspirations to join the club of first world nations a reality.”

Even discounting that rhetoric and acknowledging that the attackers were out to make a buck, the chaebol are vulnerable to such attacks because the power typically exercised by the owning family invites charges that they are acting in the family’s interest and not shareholders’.

“The fundamental problem lies in Korean companies’ ownership structure and the entrenched tendency where an owner can effectively control the conglomerate and dominate decision-making with a small number of shares,” said Hwang Sei-woon, the chief economist at the Korea Capital Market Institute.

“In Korea, ordinary shareholders are often not able to have a say in discussing the dividend ratio and other corporate governance issues, which is different from the practice in other markets.”

He said that solving the fundamental issue is important because challenges from foreign shareholders will probably continue.

“When the economy is in good shape, there are many companies that grow nicely, and investors can easily trade their shares for ones in companies with higher growth,” he said. “But when things are not as good and many companies suffer chronically low growth as is happening these days, investors want to have more of a voice and make changes.”

Other major conglomerates, including Hyundai Motor and SK, also have a tangled cross share-holding structure. As was seen in the case of Samsung, mergers and acquisitions apparently aimed at transferring more shares to the next generation can often upset foreign activist shareholders (or sometimes Korean shareholders, for that matter), giving them a reason for becoming more engaged.

Hwang at the capital market institute concluded, “I think what is more important than temporary defenses against foreign funds is adopting a more transparent culture and enhancing shareholders’ rights.”