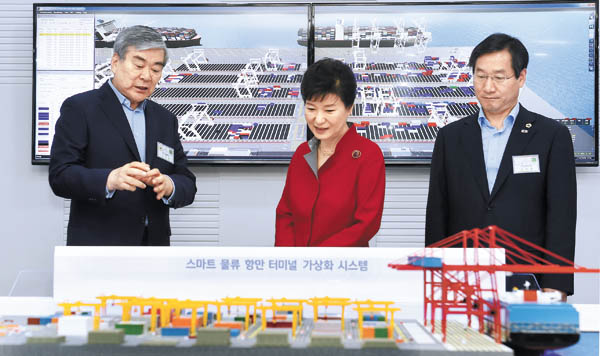 As part of the center, Hanjin created a fund worth 159 billion won ($138 million), with about 94 billion won to be used for loans to companies starting smart distribution businesses.

Building a center in major cities and regions was one of the Park Geun-hye government’s key efforts to revive the economy. According to the plan, conglomerates would open a center in regions where they already have substantial infrastructure and investments. The conglomerate and region would work together in the space to vitalize the region’s economy and the conglomerate’s business in the area.

Hanjin Group has been matched with Incheon, as the mother company of Korean Air already established its aircraft parts manufacturing and aircraft maintenance centers near Incheon International Airport.

The port city on the nation’s western coast has also been a traditional distribution hub, particularly when it comes to trading with China.

The Incheon center consists of two locations. The main location in Songdo focuses on training regional companies with ICT technology to help them come up with more value-added products related to aircraft maintenance and parts.

At the Songdo location, Hanjin aims to help some 1,000 Incheon-based aircraft and auto parts and material developers to become its suppliers.

The group eventually hopes to localize production of its aircraft engines and parts and develop an engine maintenance program with local companies at Korean Air’s engine testing center, slated for completion by the end of this year.

The location also offers assistance to fresh food exporters through a team comprised of officials from Hanjin, Korea Customs Service and the Korea Agro-Fisheries Trade Corporation. The team will select fresh produce or fisheries exporters, connect them with overseas buyers, and offer air-shipping at a discounted price.

A similar program is also offered to small manufacturers.

The center’s Jemulpo location trains 100 people every year who specialize in e-commerce with a focus on safe shipping and customer management.

Some graduates that begin their own start-ups will be given an opportunity to promote their business on bigger online shopping malls like Alibaba T-mall’s Korean product section and PandaKorea.com, as well as permission to use Hanjin’s distribution facilities.

Examples of new technology being developed at the center include a container to transport live fish that automatically controls the tank’s temperature and water quality, and drone technology to enable the shipment of fresh food to faraway countries.