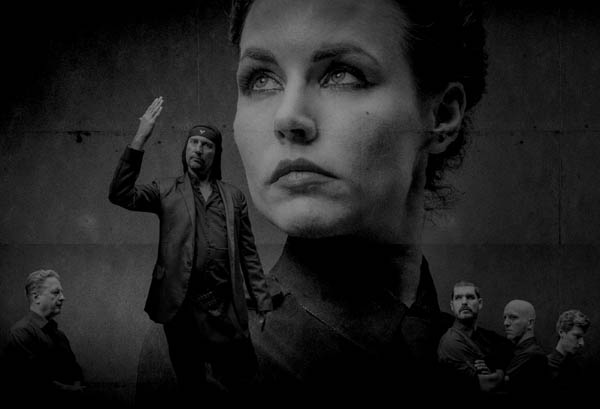 This promotional photo provided by Slovenian conceptual band Laibach shows the band’s members. The group has announced it will hold two concerts in Pyongyang next month.[AP/NEWSIS]

LJUBLJANA, Slovenia - For a band inspired by art in totalitarian regimes, a gig in North Korea is a dream come true.

Slovenia’s Laibach recently announced it will play two concerts in Pyongyang next month. The group is known for music described as a mixture of industrial rock and retro electronic, and for its use of authoritarian imagery, such as Soviet-era symbols, marches and dark uniforms.

The tour will coincide with the ceremonies marking the 70th anniversary of the Korean peninsula’s liberation from Japanese colonization, and will include Laibach’s own music as well as popular Korean songs, one of the band’s founders, producer and spokesman Ivan Novak, told The Associated Press.

“Originally, we invited ourselves and then they invited us,’’ Novak said.

Formed in 1980, when Slovenia was still part of Communist-run Yugoslavia, Laibach immediately stirred controversy with its name - German for Slovenia’s capital city Ljubljana - and because it used a black cross as one of its symbols.

This alone was enough for an official ban by the regime born out of anti-fascist struggle during World War II. Laibach were still allowed occasional concerts until, in 1983, they locked the door of a concert hall and played the sound of a dog barking extremely loudly for almost half an hour.

The band has six members, but only two - including Novak, who will be 57 in August, singer Milan Fras, a couple of years younger - have been there from the early years. Fras joined in 1983 after Laibach’s first singer committed suicide.

Despite being criticized as too dark, the band has always insisted that it is exploring the relation between ideology, politics and art. One of its main slogans states that “art and totalitarianism do not exclude each other.’’

Over the years, Laibach has gained an important place in Slovenia’s art scene. The band’s retrospective currently is part of an exhibition of the Neue Slowenische Kunst (New Slovenian Art) movement at the Modern Gallery in Ljubljana.

Laibach members are professional musicians, some of whom teach music or take part in various art projects. Laibach has held more than 800 concerts throughout the world, while gigs at home are usually sold out, drawing up to a few thousand people in a country of 2 million.

Novak said the band has always wanted to visit North Korea and remembers clearly the visit in 1977 to the country by then Yugoslav communist leader Josip Broz Tito. Novak rejected the possibility that the trip will amount to political support for the North Korean communist regime, viewed as an isolationist dictatorship in the West.

“We never support the regime anywhere where we perform .?.?. but we do support the people who live there,’’ Novak said.

He explained that the band has found inspiration for its art in the country, citing events where people fill stadiums and hold up colorful cards in carefully choreographed displays to create giant images.

“All Korea is practicing superb pop art. Superb,’’ he said. “From the point of view of art history, they should actually protect the whole country, they should put it in a museum of pop art.’’

Laibach concerts are planned Aug. 19 and 20 for an audience of 1,000 each day. Several pop singers and bands from South Korea have performed in the north in the past, while British singer David Thomas Broughton has said he performed once for expats in North Korea. Laibach’s performance, however, will mark the first encounter with a visually charged band from the West.

“We will adjust and adapt our program to the Korean situation and audience,’’ Novak said. “We will perform a gentle version of Laibach.’’ AP