Unification starts with consolidation and integration at home

Unification starts with consolidation and integration at home 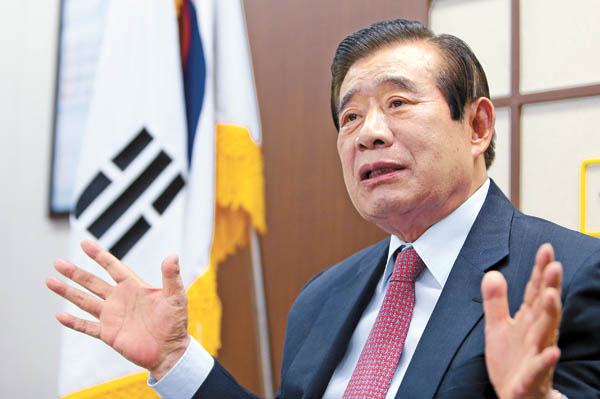 Han Gwang-ok, chairman of the Presidential Committee for National Cohesion. By Cho Mun-gyu

Han Gwang-ok, 73, chairman of the Presidential Committee for National Cohesion, began his third consecutive annual term in the post earlier this month. He has also served as chairman of the Economic and Social Development Commission, the permanent representative chairman of the Korean Council for Reconciliation and Cooperation and chairman of the Unification Negotiation Committee.

Han has numerous positions on his resume with the words “reconciliation” and “negotiation” in the titles. His name emerged during the 80’s and 90’s during negotiations on unification and solidarity, so it is probably fortuitous that he left a tumultuous political career to take the helm of the Presidential Committee for National Cohesion.

Reporters from the JoongAng Ilbo, an affiliate of the Korea JoongAng Daily, met with Han recently and asked him about the philosophy of compromise and communication.

Q. What does cohesion mean, and why do we need it?

A. Cohesion is steering disentangled interests and concerns in a single direction, rather than binding them together. It can be thought of as harmony created in an orchestra performance. Tying up 10 different things as one is not unification. That is consolidation in a socialist sense. The consolidation that we need to strive toward is allowing a diverse range of things to go down the same path. You only need to be committed to your own position and your own work, aiming in one direction. Despite methodological differences, consolidation is a problem that can be overcome with the same purposeful mindset.

Does the objective need to be the same?

Yes, it does. Even political conflicts can be solved with the same objective, one involving the interests of the people and the nation.

In the third year of the Presidential Committee for National Cohesion, people such as actor Lee Soon-jae were recruited as members. What is your opinion of this?

I phoned Lee myself to ask if he would join, and he was more than willing. Thanks to the TV program “Grandpa Over Flowers,” he is popular among young people. I worked with him as a member of the 14th National Assembly. In addition to Lee, other new members like Fr. Park Shin-un and Ven. Sung-moon are excellent people.

What is the primary emphasis of the third iteration of the committee?

We are planning to focus on refining the tasks outlined in the first and second years. We are also thinking of expanding the “Great National Debate” to help transform the debating culture of Korea. Plans are being specifically formulated for multicultural families, North Korean refugees and disabled people to map out a variety of enterprises they can undertake. The current population number of the multicultural generation has reached 290,000. The number of multicultural people residing in Korea is 1.74 million (data from the Ministry of Government Administration and Home Affairs).

Considering that we have over 200,000 such people in only the second generation, this is an immense number. If measures are not devised to allow these children to grow up and play a part in society as normal citizens, there can be extensive consequences for national consolidation in the future.

Twenty high school students took part in it, and their ideas were innocent, like food made without seasoning. They asked if their suggestions would be reflected as the debate began. Fairness and transparency were emphasized by the students. They asserted that with those two things in place, citizens would be accepting of even a tax hike.

Looking at the whole debate, the three most commonly stated words were coexistence, fairness and trust. These three words probably represent a much-needed spirit of the current times.

What is the goal that the Committee is striving for?

What is the role of the committee in efforts toward reunification?

There are about 28,000 North Korean refugees in South Korea. These people still do not feel a sense of belonging here. They are having difficulty even with education and employment. The way to speed up reunification is to ameliorate their situation so they can realize that South Korea is a good place to live in and that reunification is really needed.

What are the methods of promoting consolidation?

There are three things to take into consideration: walking in someone else’s shoes, finding the same qualities in different things and harmonizing regardless of differences. These solidify the core of consolidation.

We often speak thoughtlessly. In most fights between married couples, the cause is the delivery of a speech rather than the essence of it. It is the same with societies. Unnecessary conflicts are caused because of blunt speech.

Thus, to refine that spirit of avoiding conflict, the initiation of a “thank you campaign” is being planned within the committee.

What are the most serious problems in Korean society?

The polarization of social classes. These days, education and employment are set according to economic standards.

In the old days, people from the countryside used to be accepted into prestigious universities and pass national examinations. This should not stop happening.

Generational conflict comes right after class conflict. Comprehensive welfare policies need to be devised as the aging of society progresses, but I don’t think the process is working that well. Policies have to become the center of the scene rather than just empty talk.

Having led the committee for two years, is there anything you’ve felt dissatisfied with?

Consolidation itself is a metaphysical term. When you look at a coin, you think of only the head and the tail, not of its edge. But if the edge doesn’t exist, there is no head or tail.

Consolidation can be regarded as the edge of the coin in this sense. Likewise, the work that the National Cohesion Committee has to do this year isn’t all that revolutionary. If the first committee laid the fire, the second committee lit it. Now, work will be done to spread the heat of that fire.