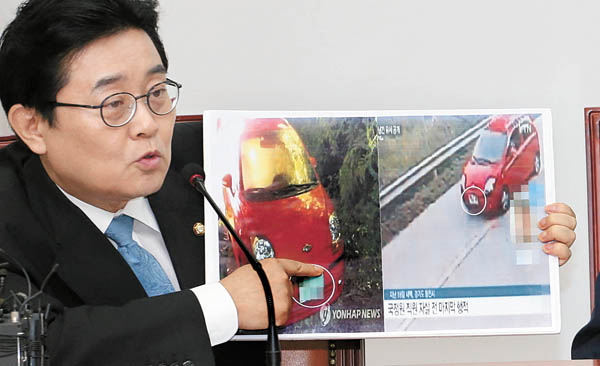 At a party meeting at the National Assembly on Wednesday, NPAD Rep. Jun Byung-hun points out that CCTV footage from police shows that the license plate of the car used by the agent who committed suicide was white, but the car in which he was found had a green license plate. By Kim Kyung-bin

The National Intelligence Service (NIS) agent who was found dead on Saturday in the middle of a controversy over whether the agency snooped on ordinary Koreans was not part of its hacking team, according to an intelligence source on Wednesday.

An official well-informed about NIS affairs said, “Yim introduced and operated devices capable of tapping and monitoring mobile devices but was not a professional hacker.”

“To be more specific, he was the operator of the hacking devices,” the source added, “and there is a separate hacking group within the NIS.”

The agent surnamed Yim, 45, was found dead in his red Matiz passenger car on an isolated hillside in Cheoin District, Yongin, Gyeonggi, at noon on Saturday. Yongin police concluded he died by asphyxiation from toxic charcoal fumes.

In a three-page, handwritten suicide note, Yim denied that the NIS monitored ordinary Koreans with controversial software purchased from Italy and admitted he deleted material from NIS records that could “cause misunderstandings related to counterterrorism and North Korea operations.”

After his death, the NIS declared Yim had been “in charge of purchasing and managing” the programs from Italy. The NIS said that Yim had deleted some data but that it was “100 percent retrievable.” It went on to say that the restored data would be released to the National Assembly’s Intelligence, Security and Public Administration Committee.

Yim was a member of a technology development unit in the NIS, the official well-informed about NIS affairs said, that supported the North Korea and counterterrorism hacking team.

There were questions as to how Yim, a middle-rank official, would have had the ability to delete files.

But since he was in charge of monitoring a high-performance computer, there was nobody to interfere with his deletion of data, according to a source from the National Assembly’s intelligence committee, which oversees NIS matters.

“In the case of Yim, he had been moved to a different division in April but was ordered to return temporarily to review material,” the source added. “The structure was such that it would be hard to tell what he deleted.”

The main opposition New Politics Alliance for Democracy (NPAD) party has pushed for a full-on investigation of Yim’s mysterious suicide and what he was trying to hide, while the Saenuri Party is pushing to quickly review the available evidence and close the investigation.

The two parties are likely to continue locking horns over how to tackle the investigation into Yim’s death and whether the NIS monitored South Koreans’ mobile devices.

Two weeks ago, WikiLeaks released over 400 gigabytes of leaked data from Italian surveillance malware vendor Hacking Team, which indicated that Korea’s NIS purchased hacking programs from it in 2012.

The day before Yim’s death, Lee Byung-ho, director of the NIS, admitted to the intelligence committee that the agency purchased the remote control system software in 2012, but said it was used to counter North Korean intelligence and for research purposes. He added that ordinary South Korean people were never spied on.

Opposition lawmakers are warning that a full-blown investigation will be nipped in the bud.

NPAD lawmakers questioned whether police fabricated evidence in their conclusions about Yim’s suicide. They said screen grabs from police CCTV footage from the day Yim committed suicide showed that the license plate of his car was white. But the car in which Yim’s body was found had a green license plate.

Yongin police brushed off the accusations, saying that the color difference can be attributed to the reflection of light, camera angles and low resolution of the video.