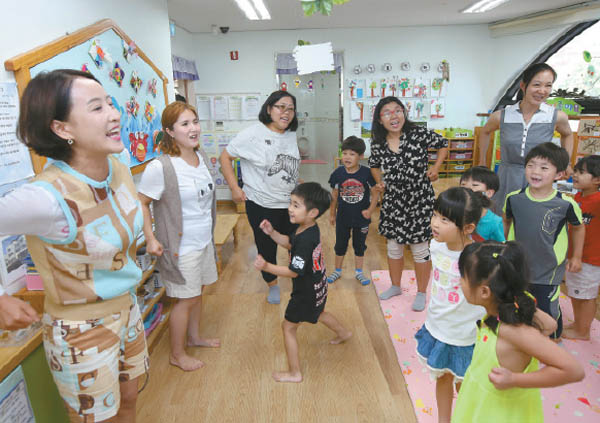 Parents attend an exercise last week at the Wolgot Day Care Center in Siheung, Gyeonggi, which recently won an award from the Ministry of Health and Welfare for its “open” model. By Oh Jong-taek

Last week, children at the municipal Wolgot Day Care Center in Siheung, Gyeonggi, learned how to play the kids’ game “Let’s Go to the Market,” not from their day care centers but from their classmates’ parents.

Lee has a child who attends Wolgot Day Care. She is also one of seven parents involved in a club with other Wolgot Day Care parents called “Story Story,” which visits the center every Tuesday to read stories and play games with the children at the center.

Following a series of child abuse cases at day care centers last winter, and in particular video footage of a day care teacher smacking a four-year-old that went viral, a number of day care centers have adopted an open model that encourages parents to participate.

Parents gain trust in the center and provide the teachers with insight into their children’s daily lives and personalities.

“We’ve been able to participate in classes, so we’re familiar with what happens at the day care center,” said Lee. “We’ve developed faith in the teachers, so I no longer feel the need to check [on the children] through security cameras.”

Wolgot Day Care Center has an emphasis on openness and transparency. Its five classrooms are completely visible from the outside, with walls made mostly of glass.

Parents can also drop in at any time they wish to check up on their children, and with CCTV cameras in every classroom, there is little opportunity for child abuse to go undetected.

There are six other groups of Wolgot Day Care parents participating in their children’s hours at the day care center, and they concentrate on activities such as doll-making, flowerbed gardening, picnics and field trips.

Parents work with the teachers at the beginning of each year to set a calendar of events for the year.

“Last winter, I participated as a teaching assistant on a sweet potato harvest and learned for the first time what my child is like at the day care center,” said Min Se-ran, a full-time working mother.

“I can’t participate in every opportunity, but once or twice a year I ask for a day off [from work] to participate in these programs. It helps me keep in touch with my child’s everyday life.”

On Wednesday, the Ministry of Health and Welfare announced that Wolgot Day Care Center had won the grand prize in a ministry competition on parent participation at open day care centers.

“After the slew of cases of child abuse, the open day care center model that allows for direct participation by parents has started to receive a lot of attention,” explained Kwon Mi-kyung, a professor at the Korea Institute of Child Care and Education.

“In other developed countries, parent participation has been the main form of day care for the last decade. Increasing parental involvement is the best method for improving the quality of education.”

The Ministry of Health and Welfare plans on expanding the open day care center model.