The heat’s on for Lee Keun-ho in Qatar

The heat’s on for Lee Keun-ho in Qatar 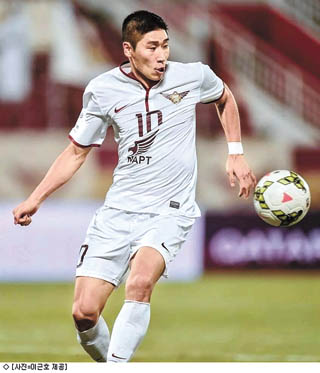 Korean footballers moving to the Middle East are no longer rare stories. For many years such a move was seen as odd football, in that heat - but recently the bad image has been changed.

Qatar is a destination not only for top Korean footballers, but also for world-class European athletes as well. Last month, Al-Sadd SC, for whom Korean defender Lee Jung-soo plays, said that it had signed the former FC Barcelona midfielder Xavi Hernandez. The 35-year-old Spaniard pass master reportedly will receive 10 million euros ($10.9 million) in salary.

Lee Keun-ho, who joined El-Jaish SC last year from Ulsan Hyundai FC, said playing in Qatar isn’t easy. The 30-year-old forward scored only two goals last season and is still trying to adapt to his new environment. The 2012 Asian Football Confederation Footballer of the Year left for Qatar again on Saturday, this time with his fiancee. He said a wedding is set for next year, but believes his future wife will be a big help to him this season.

Ilgan Sports, a Korea JoongAng Daily affiliate, met Lee on Thursday to talk about his experience and stories about the football environment in Qatar.

A. Honestly, I don’t know any other players’ salaries. Players don’t share that kind of information. But world-class players are heading to the Middle East. As I see this, I think that enormous investments must be behind the moves. Players are also curious about how much Xavi will earn.

We heard that players there are given luxury houses and cars. Is this true in your case as well?

At my club, El-Jaish, all players are given similar houses and automobiles. I live in an apartment with four bedrooms and three bathrooms. The club provides either a Mercedes Benz or BMW - it’s your choice. I currently drive a Mercedes Benz. But the important thing is that we are given this by the club, and we don’t own them. When players leave the club, they have to return them.

We heard that there are no taxes. Maybe that attracts players as well.

I don’t know about other Middle East countries, but in Qatar, there are no taxes. If I make 10 billion won ($8.6 million), I get that in cash without any deductions. But I have to pay taxes in Korea, so some people jokingly say you have to spend all your money here.

Because of the hot weather, is it true that players there train for only about an hour a day?

It’s really hot. Sometimes the temperature reaches 50 degrees (122 degrees Fahrenheit). Now is about the time the weather is getting hot, so in the Middle East, we train in the evening after sunset. It’s usual to train at about 7 p.m. We can’t train in the daytime, but the amount of training is not different than in other leagues.

We heard that air conditioners are installed on the fields. Is that true?

Many people think that all teams in Qatar have air conditioners for the ground, but only the home stadium of Al-Sadd SC has that system. There is a hole in the advertising boards and cool air comes out. Sometimes I even feel cold during warm-ups. But Al-Sadd doesn’t always turn on the air conditioner. It varies.

How do you spend your time with your Middle East teammates?

I talk with them in English. Actually, there isn’t much to do in Qatar. I often drink tea with them, play golf and go fishing. Four or five players put their money together to buy a yacht. I sometimes join them and go fishing on their yacht. But I don’t have plans to buy one here.

We heard that people avoided you in Korea because you had eaten camel meat.

At the time, I didn’t know Korea had a [Middle East respiratory syndrome] outbreak. In fact, Qatar had no MERS. I was told that the camel meat I ate was totally safe. Just think about it, it was food prepared for the Emir of Qatar. So I didn’t really have much concern about it.

Tell us about the football quality in the Middle East.

Honestly, as a team, I think we still need to work harder. Some of the Middle East players don’t seem to realize that team training is essential. They don’t obey the coach without questions, and sometimes there are debates with the coaches. So our team cohesiveness is not good, but many good foreign players are coming here, and there are very good local players. I have hope we can develop more.

Some fans criticize players in the Middle East for “bed football” - lying on the ground after a collision longer than necessary to take a break.

I think some weak teams here still play that way. In particular, goalkeepers do that and it even annoys their teammates. But if you see top teams in the league, that kind of action is rare.

Nam Tae-hee was recently assaulted. What do you think about that?

The player who assaulted Nam Tae-hee wasn’t local, but a player from another country. As I see it, Middle East players are well-mannered and clean. Lee Myung-joo told me that players in the United Arab Emirates are kind, and I think Qatari players are as well.