Who’s on third? With shifts, nobody

Who’s on third? With shifts, nobody 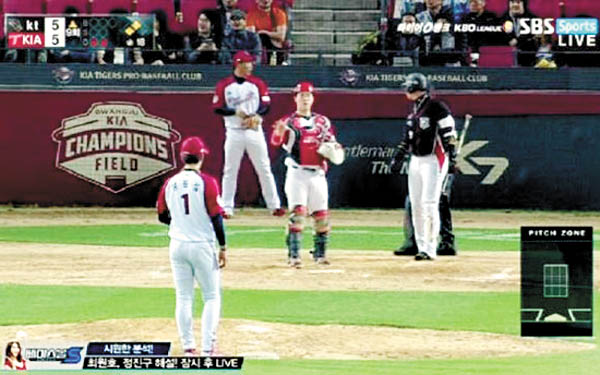 The Kia Tigers struck out by trying to move their third baseman behind the catcher in a May 13 game. Video capture from SBS Sports

On June 21, with the score tied 3-3 in the bottom of the ninth and the Nexen Heroes’ pinch runner Yoo Jae-shin at third, LG Twins manager Yang Sang-moon set up a five-man infield by moving left fielder Park Yong-taek to first base and fitting first baseman Moon Seon-jae between Park and second baseman Park Ji-kyu.

The strategy was a refinement of the normal strategy of bringing in the infield for a play at the plate if Park Dong-won, the next batter, hit the ball on the ground. But despite the switch, Park laid down a squeeze bunt and Yoo scored the winning run.

There have been several other examples of novel defensive shifts in the Korea Baseball Organization (KBO) this year.

In Gwangju in May, fans saw what might have been a first-ever fielding deployment, had it been legal. Kia Tigers manager Kim Ki-tae ordered his third baseman, Lee Bum-ho, to take up a position behind the catcher in order to keep the KT Wiz runners from advancing on a possible wild pitch.

The umpires vetoed the plan, and Kim endured some international mockery, but league skippers are obviously no strangers to defensive shifts.

“I see many more teams using shifts than a few years ago,” the Twins’ Yang told Ilgan Sports, a Korea JoongAng Daily affiliate, last month. “I can tell you it has certainly increased a lot compared to last year.”

The defensive shift in baseball isn’t a new thing. It wasn’t new in the U.S. majors even half a century ago when the “Williams shift” was used to try to contain the legendary Ted Williams.

Although there is no real definition of a defensive shift - fielders routinely shade their positions for different batters - the term usually means the movement of a player into territory usually covered by a teammate, whether in the infield or the outfield.

In the KBO, the former Hyundai Unicorns were a team that used shifts effectively. Kim Jae-bak, one of Korea’s best shortstops and later the Unicorns’ skipper, did a lot of analysis of opponents before settling on a defensive setup.

“They weren’t extreme defensive shifts like you see these days, but they were effective,” said Kim Yong-dal, a former Unicorns coach. “Shortstop Park Jin-man [now with the SK Wyverns] was a player with a keen eye for the ball, and right outfielder Shim Jong-soo benefited a lot from the readjustments.”

Some managers, notably Kim Kyung-moon of the NC Dinos, are skeptical of the value of such tinkering. And Yeom Kyung-yeop of the Nexen Heroes says that there are two conditions needed for a defensive shift to be successful: a pitcher with good control and a batter with a pronounced tendency to launch pitches in a single direction.

“As for our team, when Andy Van Hekken and Ryan Feierabend are pitching, we might try a defensive shift,” said Yeom. “But pitchers don’t like a shift because when it fails, they think they have just given away a hit.”

There is a reason why defensive shifts have become familiar in the KBO. Because of a rule change last year, each team has to have one foreign player position, and the imports are much more pronounced pull hitters than their Korean teammates.

And analytics have invaded baseball. In 2012, the SK Wyverns moved third baseman Choi Jeong further from the foul line against left-handed batters, following coach Joe Alvarez’s advice. He pointed out that there weren’t many left-handed hitters in the KBO who could send a line drive down the third-base line.

More managers and coaches are studying formations these days. KT Wiz coach Kim Min-jae said that he has been studying a formation in which the second baseman and shortstop stay close to second base when pitchers with a good sinker and cutter are on the mound. Hanwha Eagles chief assistant coach Kim Kwang-soo is known for pulling outfielders in when trying to protect a one-run lead.

“When you analyze pitches and swings, there is a certain pattern to where the ball goes,” said former Unicorns coach Kim. “Not only have talent and training become important for baseball players, but the ability to analyze has also become an important factor.”

The accumulation of data is also helping. Defensive shifts are meaningless if you don’t have a spray pattern for each hitter. Each team has had its own database for a long time, and they are now trying to take advantage of it.

“As more and more data are accumulated, the creditability of the data is also going up,” the Twins’ Yang said. “More managers now believe in data than in the past.”

In the U.S. majors, a heavy use of defensive shifts helped the surprising Tampa Bay Rays reach the World Series in 2008.

“Tampa Bay was a club that used a shift strategy very well,” said Kim Hyung-joon, a Major League Baseball analyst for MBC Sports+. “The success of Tampa Bay had an influence on other teams.”

According to the Bill James Handbook, a popular baseball statistics book, there were 2,464 defensive shifts in the MLB in 2010, but last year, the number jumped to 13,296.

As the defensive shift is used more here, what can batters do to counter the extreme position realignment? So far, there seems to be no right answer; it’s hard and perhaps counterproductive for a hitter to try to change a grooved swing.