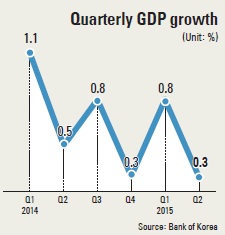 The Bank of Korea (BOK) said on Thursday that the country’s gross domestic product expanded by a mere 0.3 percent, slowing down from 0.8 percent in the previous quarter and below the 0.4 percent forecast by the central bank early this month.

News of the disappointing growth comes as a 22 trillion-won ($19 billion) stimulus package, including a supplementary budget, has been awaiting approval at the National Assembly for almost a month. The ruling and opposition parties said on Thursday they would try to pass the bills today.

The economy expanded by 2.2 percent year-on-year, data showed, also below the 2.3 percent widely forecast by analysts. Analysts say achieving the annual growth of 2.8 percent forecast this month by the BOK would be a “challenge.” The BOK’s earlier outlook was for 3.1 percent growth.

“Looking at the second quarter figures, achieving even mid-2 percent growth would be a challenge,” said Lee Han, an economist at Shinhan Investment, adding that weakness in domestic consumption and exports will likely persist for some time.

In a report released on Thursday, HSBC lowered this year’s growth from 2.8 percent to 2.4 percent, adding that the central bank will likely make another interest rate cut in the third quarter.

“MERS and the drought were largely responsible,” said Jeon Seung-cheol, a BOK director general. “We believe, however, that the numbers will pick up slightly in the third quarter as depressed consumption and production recover a bit.”

In order to revive the slowing economy, the central bank and the government have made concerted efforts this year, including a series of interest rate cuts and stimulus plans.

“Stimulus measures need to be enacted as soon as possible,” said Bae Hyeon-kee, head of the Hana Institute of Finance. “The effect of the package could give the economy a 0.3 percent boost it badly needs.”

Analysts, however, also said the stimulus and monetary measures by themselves will not give the slumping economy a meaningful growth catalyst, stressing that major overhauls, including labor market reforms and corporate restructuring, may be necessary.

“Unless a huge sum - maybe 100 trillion won - is released, there will be no short-term cure for the economy,” said Kim Seong-tae, an economist at the Korea Development Institute. “The answers are already here, we have been talking about reforms in the labor market, restructuring in the corporate sector … there will be no growth unless changes are made.”

“There are more than one million youngsters struggling to find jobs,” Park said during a cabinet meeting on Tuesday. “When the retirement age is extended starting next year, youth unemployment will grow worse, unless we smoothly introduce the peak salary system,”

As a lot of companies operate on a seniority-based wage system, the extension is expected to increase labor costs and discourage companies from hiring new recruits. However, the peak salary system is expected to ease that transition, allowing salaries of older employees to peak a few years before retirement and then gradually decrease, saving the companies money so that they can hire more entry-level employees.

A slump in exports is a major factor in the shrinking growth, BOK data showed.

Slowing growth in China and the comparative advantage enjoyed by Japanese rivals thanks to the weaker yen were cited as key factors behind the export slowdown. The weaker yen has affected local shipbuilders, automakers and steel manufacturers in particular, analysts said. Energy-related industries such as petrochemical manufacturers were also hit by a renewed drop in energy prices.

“The competitiveness of Korean companies is weakening,” said Bae of the Hana Institute of Finance. “When a company is hit hard, we normally resort to giving financial support rather than restructuring. This needs to change.”

Recently, the country’s No.3 shipbuilder, Daewoo Shipbuilding & Marine Engineering (DSME), was found to have massive losses on its books - as much as 2 trillion won - prompting calls for emergency aid by creditor banks, including the Export-Import Bank of Korea.

The Korea Development Bank, the major shareholder of the company and also a creditor, said this week that it will provide the troubled shipbuilders’ customers with refund guarantees in the event that it fails to fulfill orders in an effort to keep customers calm. It is also working on restructuring plans that include asset sales and layoffs.

“There may be more firms like DSME with hidden losses … banks need to recognize such losses quickly and make proper judgement calls as to who will survive and who won’t,” said Kim at the KDI. “And when necessary, clean-ups need to be done more actively.” He added that even without the MERS outbreak, economic growth in the second quarter would have been 0.5 percent at most.

Looking into industry segments, the agricultural and fishery industry was hardest hit, with its output declining 11.1 percent due to drought.

The services sector saw a mere 0.1 percent growth, despite the financial and real estate sector seeing firm growth. Retail, food and hospitality suffered a 0.5 percent decline due to the MERS outbreak.

“The hit on the tourism industry is… unlikely to recover for a majority of the third quarter,” said Joseph Incalcaterra, an economist at HSBC.