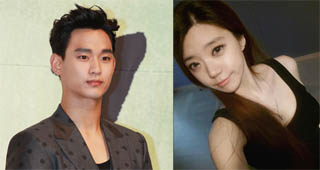 In response to flowing criticisms, singer Kim Ju-na, currently at the center of attention for being discovered as the half-sister of K-pop actor Kim Soo-hyun, explained that she is not trying to promote herself using her half-brother.

The news that the actor even has a half-sister became viral on the Internet on Wednesday.

According to media outlets, a person involved with the singer said, “It is true that Kim Ju-na is the actor’s half-sister. We’re a little taken aback by the news that suddenly started flowing on the Internet.”

A person close with the K-pop actor confirmed his position.

“The two are half-brother and sister, but they have no correspondence with each other,” the source said.

The singer, who has not yet made an official debut, sang “I Can’t Live Without You,” which played on the TV drama “High Society” (2015).