Master of macabre also has uplifting side

Master of macabre also has uplifting side 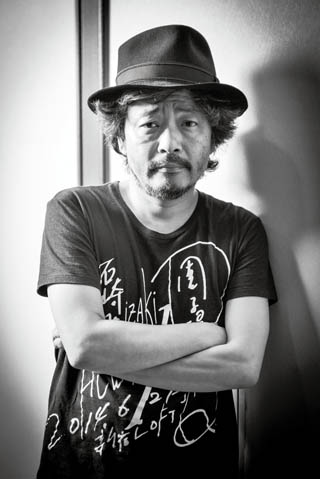 Sion Sono Provided by the organizer

BUCHEON, Gyeonggi - Japanese maverick Sion Sono has been directing movies for nearly three decades. But it is still hard to find an accurate term to describe his, at times, abstruse works.

A poet-turned-director, Sono has churned out a couple dozen films, including thrillers, action movies, comedies and romances, but no work follows in the footsteps of another.

If there are consistent traits in Sono’s films they would be the extremity of their themes and over-the-top violence accompanied by bucketloads of blood. Those traits have also won him accolades and loyal followers.

To acknowledge Sono’s distinct contribution to the field of genre films, the 19th Bucheon International Fantastic Film Festival (BiFan) has set up a special program for his works, entitled “I am (not) Sono Sion.”

The Korea JoongAng Daily met Sono in Bucheon on Wednesday to talk about his latest films as well as his overall cinematic sensibility.

Sono has visited Korea several times in the past, but this was his first time in nine years to revisit BiFan.

Q. How do you feel visiting BiFan after nine years and having a special section dedicated to you?

A. It reminded me of many things, but most of all, I am glad to talk about my films and various topics with a Korean audience. Having a sort of retrospective exhibition about me - I participated in selecting the lineup - I feel like I have lived a very hardworking life.

What movie did you particularly recommend be included?

“Guilty of Romance.” I felt sorry that it was overshadowed by “Love Exposure.”

You have made some radical films. Where does your inspiration come from?

It is not like I am a pervert or anything, but I just like something fun. I mostly get my ideas for screenplays from my own experiences.

That is kind of scary because a lot of your movies include blood-spattering scenes. What kind of experiences have you gone through?

For example, for “Why Don’t You Play In Hell,” I happened to know a girl who was from a yakuza family. She urged me to pretend that I was her boyfriend because she was afraid to introduce her real boyfriend to her father. But the talk kind of went in a wrong way and it made it seem like I raped her. Her father, the oyabun [leader of a yakuza clan], became furious and told me he would kill me. He actually took out his sword.

Did you have to depict such experiences in a brutal, sometimes even grotesque, way?

The reason why I keep making shocking films is because I believe that nobody knows what lies ahead of them. Maybe [it is] because I’ve been through so many surreal events. I believe that anybody can find themselves sucked into unpredictable happenings. The repeated line in the film “Tag” that says “Life is surreal, don’t let it get to you,” is like a catchphrase of my life.

But in your recent film “Love & Peace,” there is not a single scene showing blood or any disturbing violence. It’s an uplifting film talking about pursuing one’s dreams. What’s the reason?

This time, I wanted to make a film that could be shown to children. [In comparison with my previous films] I can say that this film is the one that resembles me more. When I was stuck in the process of writing the screenplay, I would go to somewhere I could touch furry animals and get back home healed.

Maybe it is because I got married [three years ago] and found a stable life, but aside from that, I have always been drawn to making a movie that is different from the previous one. That rebellious side is innate in me.

Now that you have made dozens of films and even established your own production company called Sono Production, you must have your own standard and priorities in making films. What are they?

In the past, I thought a film’s message was more important than the overall mise-en-scene. But these days I’ve realized that those messages won’t have meanings if they are messed up by poor acting. A message can be just told to the people but that is not what a movie is about. I stake my chances on actors’ acting skills.

What is your definition of good acting?

There is no such thing as a bad actor. Any actor has potential to perform well, but they are failing to do so because many of them try to imitate “cool acting,” that is putting on other actors’ clothes. As long as they find the right style, any actor can shine in a film. And then it becomes my responsibility to find a fitting style for each actor.

I’ve heard that you have many more films coming up in the next year.

I finished one film [tentatively] titled “Whispering Star” just before I arrived in Korea. I think it is going to be a controversial sci-fi film.

I am going to return [to Japan] and finish another film which is slated for this summer and there is another one coming up centering around a female painter slated for the fall. That one was finished shooting in only four days.

I am going to work like a machine until the middle of next year and then I will think about taking a rest for once.