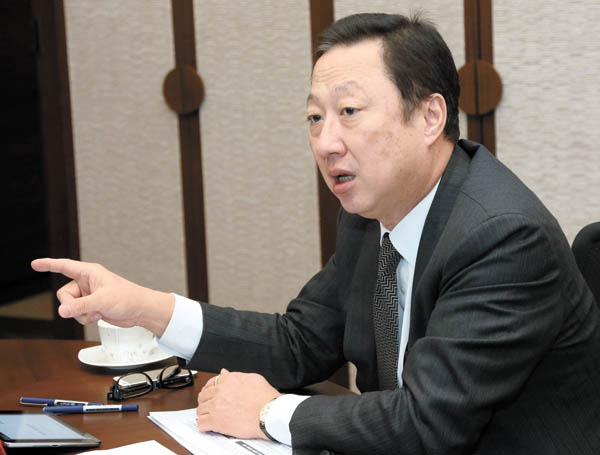 Park Yong-maan, chairman of the Korea Chamber of Commerce & Industry (KCCI), has publicly asked President Park Geun-hye to include two prominent business leaders in her list of pardons to be issued on Aug. 15, Korea’s Liberation Day holiday.

He asked for the pardons of SK Chairman Chey Tae-won, now imprisoned after being convicted of embezzlement, and Hanwha Chairman Kim Seung-youn, whose sentence for illegal intra-group financial transactions was reduced and then suspended after he spent time behind bars.

“Businessmen should be among the candidates for a special pardon for the sake of national harmony and the national interest,” he told reporters on Wednesday during an annual forum the chamber organizes in Jeju Island. “If [the two] are excluded because they are businessmen, that is reverse discrimination. I think the president will make a positive decision.”

This is the second public appeal by the chamber’s head, the chairman of Doosan Group, on behalf of the two tycoons. His first was during a press conference in January.

President Park suggested last month that she would consider issuing pardons “for the country’s development and national unity.” She has drawn the ire of the business community for her persistent refusal to go easy on business leaders who run afoul of the law. She made that comment at a meeting with leaders of her Saenuri Party in the National Assembly, where the legislative leaders also pressed her to pardon convicted politicians.

Chey, 54, was arrested in January 2013 for embezzling almost $47 million in corporate funds and began a four-year prison term in February 2014. SK is Korea’s third-largest conglomerate. Hanwha’s Kim, 62, was convicted of illegally diverting funds from healthy affiliates to weaker companies of his group. Despite his release, he remains barred, at least legally, from running his group.

In other comments to the press, the KCCI chairman also called for reflection about the factors that prompted a U.S. hedge fund, Elliott Associates, to mount a management challenge against Samsung C&T.

“I wonder if we need to protect a hedge fund that only aims for a quick profit,” he said. “I think companies need a way to guard their management rights. But at the same time, we also should look back on whether we have left some room for such funds to feel tempted to launch an attack.”