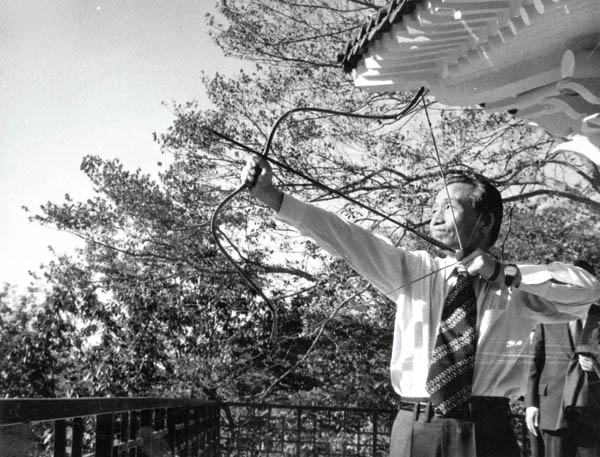 President Park Chung Hee draws a bow on Oct. 29, 1976, at Hansanjeong Pavilion in Tongyeong, South Gyeongsang, after attending a ceremony honoring the birth of Admiral Yi Sun-sin. Park liked archery and often enjoyed it in the backyard of the Blue House. [JoongAng Photo]

On April 27, 1971, President Park Chung Hee won 6.34 million votes in the seventh presidential election, beating his opponent Kim Dae-jung by about 950,000 votes. It was no small gap, but still, Park wasn’t satisfied with the result.

The following day, I was at my farm in Seosan, South Chungcheong, and heard the National Election Committee’s announcement about Park’s victory. Then I got a phone call from the Blue House requesting I attend a ceremony at Hyeonchungsa Shrine in Asan to celebrate the birth of the great Korean Admiral Yi Sun-sin (1545-1598).

Park attended the ceremony each year with first lady Yuk Young-soo and would then visit the shrine’s archery field. He enjoyed archery. He would shoot three to four out of 10 arrows on a target 145 meters (158 yards) away, but he couldn’t hit the target at all that day. He had a bitter smile on his face, and I could only imagine that he was silently fretting.

After the ceremony, Park would go to a tourist hotel in the city for lunch. That time, he asked me to come up to his room on the fifth floor, where he was alone, looking out the window. 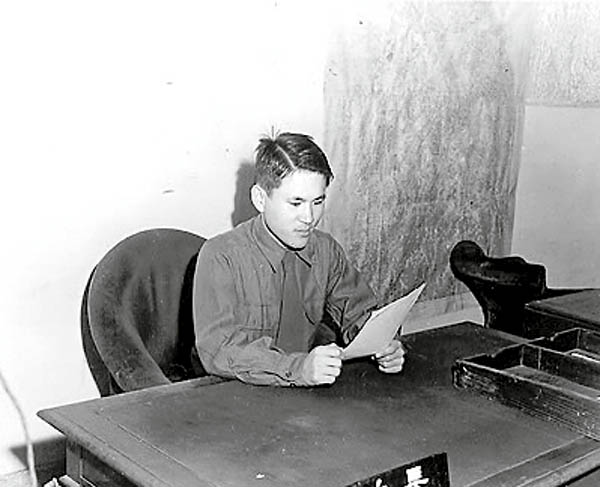 Colonel Lee Hu-rak, then 27, worked in the intelligence department at the Army Headquarters in 1951. He was commissioned as an officer earlier than Park Chung Hee and was promoted to brigadier general at 29. [JoongAng Photo]

“Hey,” he said after a long pause, “I think I’ve made a huge contribution in terms of making the country better and more developed. So how is the gap only 950,000 votes? I made more headlines than Kim and spent more on my campaign. I’ve used countless administrative power as well.

“An election may be necessary for democracy, but it may lead to disaster. Kim will probably be president next time. Elections may choose the wrong person, not the man who can make the country healthier, which will be a huge setback for modernization.

“So I have to think of something special.”

I had predicted that Park would win by at least a million votes in that election, and Presidential Chief of Staff Lee Hu-rak guaranteed two million ? so I can see why the result must have disappointed him.

Having agonized over our recent constitutional revision, I worried about, but also supported, Park’s thoughts on another. It was later that I noticed he was already mulling over the Yushin Constitution, which came into effect in Oct. 1972 and gave him dictatorial power.

At the time, national security was at stake. On March 27, 1969, U.S. President Richard Nixon withdrew 22,000 soldiers from South Korea. With outnumbering military forces, North Korean leader Kim Il Sung said that he would have his 60th birthday party in Seoul.

Park was attempting to create a political system to settle crises inside and outside the South.

Presidential Chief of Staff Lee outlined the basic plan for the Yushin Constitution. Despite not taking part in the 1961 revolution, he served as the presidential chief of staff from 1963 to 1969 and as South Korea’s Korean Central Intelligence Agency (KCIA) director from 1970 to 1973.

He made huge contributions to the constitutional revision in 1969 for Park’s third presidential term, and then the revision to the Yushin Constitution that would cement the president’s hold on power.

Lee and I had been acquainted for some time, from when I worked in the intelligence department at the Army Headquarters. In 1950, Park and I once drank in Da-dong, Jung District, way past curfew, when I suggested walking to Seoul Station and taking bicycle rickshaws there. There were dozens of them at the station at the time, and Park was staying in an old Army residence that had once been used by Japanese forces near Samgakji.

My lodging was in Itaewon.

But he suggested another idea.

“Lee Hu-rak is staying at an inn here in Da-dong. He must have a jeep; let’s borrow it.”

So we came up to the inn and knocked on the door. A girl came out.

To which she bluntly responded: “He’s sleeping.”

“Tell him Park Chung Hee is here to see him.”

A little later, an irritated voice in the inn called out, “Tell him I’m sleeping.”

Lee must have thought Park was no more than a wannabe communist, though he eventually went on to achieve great things.

Park and I went to Seoul Station after all and took rickshaws, shouting at the top of our lungs. An officer came out of a nearby police station and tried to stop us, but we quickly ran through Samgakji.

I was the one who brought Lee into politics. He finished his training at the Japanese Aviation Officer School and then immediately entered Military Language School, where he was commissioned as an officer even earlier than Park. He was promoted earlier than his peers as well - becoming a colonel at 27 and a brigadier general at 29.

Under the Rhee Syngman administration, he worked at the South Korean Embassy in the United States and then took charge of the 79th Unit, named after his military serial number. After the April Revolution [a popular uprising on April 19, 1960, led by labor and student groups that resulted in the resignation of Syngman Rhee], he worked as a deputy-ministerial level officer in the Prime Minister’s Office.

Following our May 16 revolution, he was accused of supporting the Chang Myon government and hindering our efforts, which landed him in Mapo Prison for a month.

I stepped in to save him, however. Heading the KCIA, I was so busy that I didn’t even realize he was imprisoned.

Lee Byeong-hee, the KCIA’s branch director in Seoul, was the one who came to me and reported that there was no reason why Lee Hu-rak should be locked up. I thought he was right and persuaded my revolutionary leaders.

“Lee [Hu-rak] was the KCIA director under the Chang Myon government; he couldn’t help disturbing the revolution.”

He was also acquainted with President Park, and I had once served with him as a superior at the Army Headquarters.

So I met with him in person.

“In a turbulent era, we have unwillingly given you strife. But can you now help the revolutionary government?”

He answered quickly, “Absolutely, I will do anything. I don’t know how I ended up here.”

I assessed him as a smart man and a shrewd strategist. So we made him president of the English-language Korea Republic. He did a good job and was popular with foreign envoys in Korea for producing a relatively fair newspaper.

But Park, who was then the chairman of the Supreme Council for National Reconstruction, didn’t watch him toil at a newspaper company.

So Lee was then named head of the council’s public relations department, and he proved to be very good at catching the fancies of his bosses.

Once he was ordered to do something, he would quickly finish the task. Park must have liked him as well. After winning the presidential election in Oct. 1963, he appointed him as the presidential chief of staff as Park reformed the Democratic Republican Party (DRP) and the government.