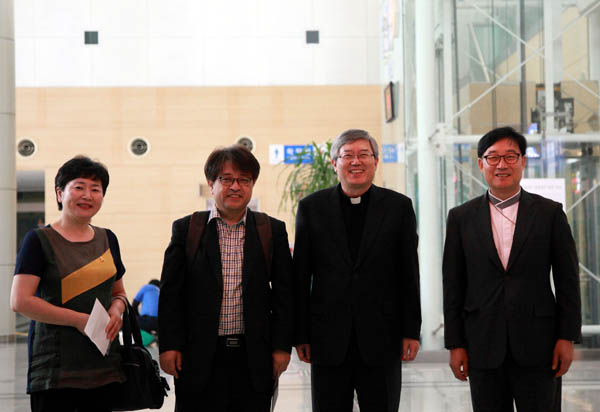 An alliance of South Korean civic groups working toward a joint celebration for the 70th anniversary of the peninsula’s liberation from Japan prepares to visit North Korea on Thursday to discuss the event with its North Korean counterpart. [NEWSIS]

The South Korean government is reviewing various proposals for talks with North Korea, including the possibility of sending a special envoy to begin restoring severed inter-Korean relations, according to a senior Seoul official.

“We have to take proper action at the proper time, whether it be a proposal for dialogue or something else,” he said on Wednesday. “We are considering various plans.”

The North, the official continued, has responded rigidly, while the South has struggled to determine the best way to restart talks.

Asked whether the Park Geun-hye administration was considering sending a special envoy in an attempt to thaw frozen ties ahead of the 70th anniversary of Korea’s liberation from Japan, the official said, “We aren’t ruling out that possibility.”

However, he made clear that there would not be secret contact via private middlemen, as past administrations had done.

Regarding the possibility that the two Koreas would hold a joint commemoration ceremony to mark Liberation Day on Aug. 15, the official said the government intended to avoid a political event.

“We are not trying to control the plans of civilian groups,” he said. “We are just asking them to avoid any political controversy in order to actually realize these events.”

Earlier in the morning, the Ministry of Unification approved an application from an alliance of South Korean civic groups to visit North Korea to plan a joint ceremony for Liberation Day. The two sides held a discussion in the afternoon in Kaesong, North Korea.

North Korea has already insisted that the event must take place in Pyongyang, adding that the door is open for South Koreans to attend. Still, the official reacted carefully to the North’s stance, saying a decision would be made after the talks in Kaesong.

The official also stressed the importance of continuous efforts to persuade the North to participate in a dialogue. Various ministries, including the Ministry of Unification, have proposed talks to North Korea over the past few months, but all faced rejection.

A Unification Ministry official said on Thursday that the government is considering possible proposals to the North for holding reunions of families separated during the 1950-53 Korean War and resuming tourism at Mount Kumgang, a scenic North Korean resort.

The last family reunions took place in February 2014, and Seoul has long expressed concern that as the separated family members age, they need to meet their loved ones before they die.

The tourism program to Mount Kumgang was suspended in 2008 after a North Korean soldier fatally shot a South Korean tourist.

The senior official added that there is also a need to hold a higher-level meeting to address pending issues concerning the Kaesong Industrial Complex.

The North has insisted on a wage hike for its workers, making a series of unilateral changes to the regulations governing the inter-Korean economic zone.

The South-North Joint Committee on the Kaesong Industrial Complex met on July 16, the first time in more than a year, though talks ended without progress.

“We are trying to have many contacts with the North via civic groups in order to create an opportunity to thaw frozen ties,” the source said, indicating Seoul’s intention to support civilian exchanges.

He also expressed anticipation for the upcoming trip to Pyongyang by Lee Hee-ho, the widow of the late President Kim Dae-jung.

Lee is scheduled to visit the North Aug. 5 to 8.