After MERS, consumer sentiment bounces back

After MERS, consumer sentiment bounces back 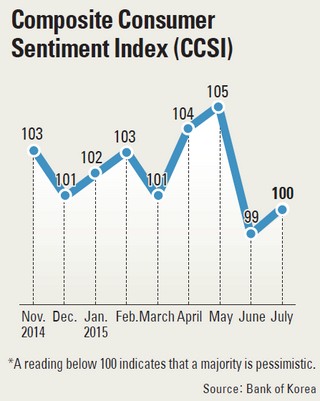 But there are still doubts that sentiment will turn around in the second half and Koreans will start spending again. The market is already betting on another interest rate cut by the central bank within this year.

The Bank of Korea (BOK) Friday released a report showing that the composite consumer sentiment index (CCSI) added one point from June’s 99 to reach 100.

When the CCSI is below 100, it indicates that the majority of the people polled are pessimistic, while a reading above 100 indicates the opposite.

“As the MERS situation has been stabilizing, consumers’ expectations for economic recovery have been growing,” said a BOK official. “As the outlooks improved, the index has recovered to the standard 100.”

The Ministry of Health and Welfare has not announced a single new MERS infection or death in the last 19 days.

MERS had a huge impact on the overall economy since the outbreak began at the end of May.

The CCSI was actually improving before the MERS outbreak compared to the beginning of the year, raising hopes for gross domestic product growth of above 3 percent for 2015.

In May, central bank governor Lee Ju-yeol was optimistic the economy was on a recovery track. But then MERS struck, resulting in a sharp decline to 99 in June.

Earlier this month the BOK projected the second quarter economy at 0.4 percent compared to the previous quarter. The actual figure released on Thursday showed the economy saw slower growth of 0.3 percent.

The unexpected impact of MERS coupled with struggling exports have raised doubts that the economy can achieve the 2.8 percent growth for the year that the central bank predicts, even a 22 trillion won ($18 billion) stimulus package. The government has a more optimistic attitude. The Ministry of Finance believes that with the stimulus package, Korea’s economy will grow 3.1 percent.

Analysts are already projecting the central bank will lower the interest rates from the record-low 1.5 percent.

“In the second half, the Korean economy will likely see limited recovery,” said Kim Doo-un, economist at Hana Financial Group’s global asset research. “Even when including the supplementary budget, the second half will struggle to achieve 3 percent growth.”

In a recent report, Standard Chartered said the supplementary budget will have a positive affect on the economy, but it will be difficult to solve structural problems and if the weakening of the Japanese yen continues, Korea’s export competitiveness will be further diminished. It predicted another interest rate cut.

“We don’t see a drastic improvement in momentum in the second half to compensate for this quarter’s weak performance,” said Joseph Incalcaterra, an economist at HSBC, in a report released Thursday. “Consumer woes will likely persist as high household debt levels weigh on consumption and tourist arrivals plunge. Exports are unlikely to pick up as growth momentum remains subdued, especially across emerging markets as key industries such as shipbuilding face strong headwinds.

“Moreover, the fiscal stimulus released by the government via a supplementary budget will likely only have a limited impact on growth, once accounting for the fall in tax revenue.”

He predicted a BOK rate cut in September.