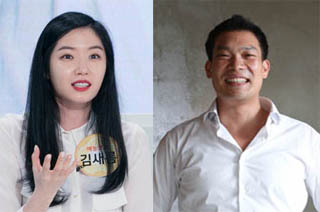 Supermodel-turned-entertainer Kim Sae-rom and star chef Lee Chan-oh will tie the knot next month, according to Kim’s talent agency, Chorokbaemjuna E&M, on Friday.

“The couple is not planning to hold a wedding ceremony. Instead, they will invite each side’s family and relatives for a simple meal,” commented a person in relations with the entertainment company.

The 27-year-old is reported to have met her fiance in April through some friends from the modelling industry.

Kim’s spokesperson from her talent agency denied rumors that the former supermodel was pregnant, which had led to the sudden marriage.

After debuting as a supermodel in 2004, Kim has been taking part in various programs such as MBC’s “My Little Television” and “Star Diving Show Splash.”

Her fiance is also gaining a following these days by appearing in various cooking programs such as “Olive Show 2015” and “Please Take Care of My Refrigerator.”
By Jin Min-ji