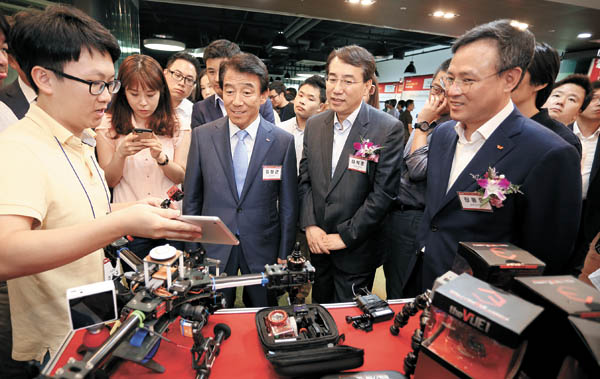 DAEJEON - Engineers in neatly ironed suits were standing somewhat awkwardly beside small booths waiting for visitors come by, but as soon as a potential investor approached to ask what their products were, their eyes start shining and their voices showed confidence.

Lee Sung-ho, CEO of a 10-month-old start-up called CMES, was one of the engineers-turned-businessmen who started a presentation to potential investors of his 3-D scanner that is used to check auto parts quality.

“This machine seems like it has nothing to do with our lives, but it actually is extremely significant,” Lee said, “because it tests that this small auto part that goes into the car you drive is safe.”

CMES was one of 10 graduates of the Daejeon Center for Creative Economy & Innovation’s start-up fostering program 10 months after it opened under the leadership and support of the SK Group.

The last of the 17 government-planned innovation centers opened on Wednesday. The Daejeon Center was the first to produce graduates and held a business demonstration day Friday afternoon, inviting venture capital firms and “angel” investors nationwide to its center on the Korea Advanced Institute of Science and Technology campus.

As Lee explained the workings, the scanner shot a blue beam smoothly over a stack of auto parts connector pins and scanned them. As soon as the beam passed a group of parts, the screen displayed a 3-D shape analysis of each unit’s height and shape by reading it nanometer by nanometer.

Auto parts makers now use a quality-check machine that repeatedly taps each units connector pins, causing it to become progressively less accurate in picking out defective parts. The 3-D scanner has an error rate of less than 1 percent, Lee said, compared with the 10-percent error rate with the older machines.

Lee only had four employees, including himself, when he founded the company last September. But after entering the Daejeon Center, a start-up support facility jointly run by SK Group and the government fostering ICT, CMES has grown to have 1.1 billion won ($942,000) in sales over the past 10 months.

His clients include large automakers and parts makers in and out of the country, including Hyundai Motor, Hyundai Mobis, the German parts maker Continental, Bosch, and other parts suppliers in Korea and the Philippines.

“We know our company is a rare case in seeing more than 1 billion won in sales as a new start-up, because all we had 10 months ago was technologies and ideas,” Lee said. “All was possible thanks to quality mentor engineers and business experts here at the Daejeon Center, who provided us seed money, taught us business administration skills and even business presentation manners.”

The most helpful assistance at the center was how to network with the right client, Lee emphasized. SK Group introduced Lee to an executive at Continental Korea, who was a former executive at SK Group. After signing a supplier contract with Continental, more industry members approached after hearing of the new firm.

“After graduating, the 10 start-ups can still come back to the Daejeon Center any time they need assistance and to work with new start-ups established here in the future,” said Kim Jeong-su, a senior executive at the creating shared value office at SK. “They can also be matched with our affiliates’ business units, so it becomes a win-win situation for both parties.”

CMES plans to supply the scanner to SK Hynix to test chips.

A cloud-based video streaming platform start-up called Video Factory is being fostered at SK Telecom America’s office in Silicon Valley. There, the company has joined the F50 program, supported by Google and other IT giants, as first Korean start-up to receive business consulting and eventually investments.

The Daejeon Center will pick a second group next month.