Arirang TV to air at UN’s headquarters in New York

Arirang TV to air at UN’s headquarters in New York 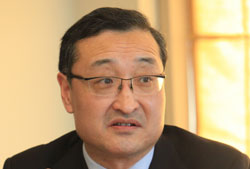 The government-affiliated English-language broadcaster Arirang TV will now be available 24 hours a day at a central battleground for global diplomacy: the United Nations headquarters in New York.

Last week, Arirang TV signed a memorandum of understanding (MOU) with the UN under-secretary general for communications and public information, joining 20 other major broadcasters from around the world, including BBC, CNN, France 24 and Al Jazeera.

It will be featured on the UN In-house Network via an Arirang TV UN Channel.

“We’ll now be able to present diplomats from all countries with a Korean perspective on issues relating to Korea,” said Arirang TV CEO Bang Suk-ho.

The network is the second Asian channel to broadcast for the UN following Japan’s NHK World, an English-language television service that began airing at the UN in May. It is already fiercely at odds with Arirang TV in terms of broadcast diplomacy at the UN headquarters.

“Currently, Japan’s NHK World explicitly broadcasts content on regional territorial issues that favor Japan,” Bang said. “But now a broadcast has been created that can speak to Korea’s national interests.”

Broadcasting through Arirang TV is considered a key opportunity to provide a unique Korean perspective on issues ranging from climate change, terror, human rights and other global issues, and to broadcast real-time information in an important global meeting place.

It also plans to distinguish itself from other broadcasters in the UN headquarters through formatting.

“We are going to broadcast in a new format different from the other broadcasters at the UN,” Bang said. “There are a lot of programs designed for two-way communication that viewers can interact with through their mobile devices.”

The broadcaster has plans to expand its broadcasting to UN-affiliated organizations in Wien, Austria; Nairobi, Kenya; and Geneva, as well as other countries and organizations.

“When it comes to large catastrophes or issues regarding North Korea, there are instances in which foreigners acquire a distorted vision of Korea. It’s Arirang TV’s role to systematically represent Korea. We plan on entering the British market next,” Bang said.