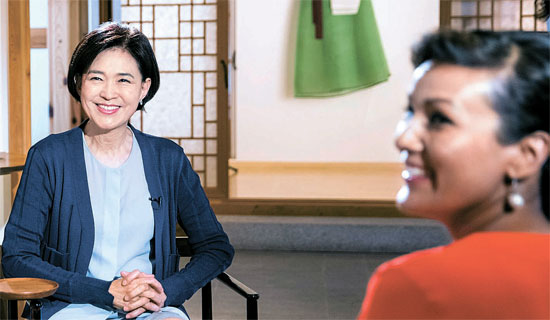 A table of Korean traditional fish dishes fascinated a group of foreign media and showed them that Korean cuisine is not just about kimchi and red chili.

A bowl of noodles garnished with dried mineo (croaker), fish dumplings with wrappers made of mineo fillet, as well as a chain-shaped skewer with beef and mineo fillet, filled the dining table for a group of visitors from CNN.

Sumnima Udas, a CNN International correspondent based in New Delhi and host of Talk Asia, said, “I thought Korean cuisine is mostly spicy, but it’s actually neat and colorful.”

The traditional Korean dishes made with a single ingredient, mineo, were prepared by the Arumjigi Culture Keepers Foundation, a nonprofit organization dedicated to preserving traditional Korean culture, located in Tongin-dong, central Seoul, on July 11.

The CNN crew carefully captured the cooking of the dishes by chefs at the foundation.

The CNN team stayed in the country for six days from July 7, to produce a Talk Asia segment on Korean cuisine that will feature the Arumjigi Foundation.

Talk Asia, a CNN International program that usually interviews a single subject, is scheduled to air a special episode about Korean cuisine on Sunday morning at 7:30 a.m., Korea time.

Arumjigi was established in 2001 to preserve Korean traditional culture for future generations. It mainly focuses on the modernization and globalization of Korean traditional culture via various projects, including research on Korean cuisine’s globalization, the use of hanok (traditional Korean houses) for modern living and a campaign to grow shade trees in every neighborhood. Traditionally, shade trees were planted along neighborhood streets for residents to hang out and socialize.

The food the team picked in Mokpo was mineo, a traditional ingredient in the region that people eat to stay healthy, especially in the summer’s heat. The chefs brought the fresh mineo back to Seoul and used them in a variety of dishes.

“Our chefs prepared them in different ways based on traditional recipes,” said Yun-gyun S. Hong, chairwoman of the Arumjigi Foundation. “For instance, they dry the fillet for a while before putting them in a soup, and they developed an entirely new recipe that uses the dried mineo.”

Udas and the rest of the CNN crew tried the dishes and liked them.

“Korean cuisine is now better known to the rest of the world compared to the past, but it is regrettable to see there still is an image that Korean dishes are mostly spicy,” Hong said in a separate interview with Udas on July 12.

“Korea is a small country, but the ingredients and recipes vary widely between regions as temperature differences are huge between northern and southern parts of the country, and the geographical conditions are also very different among regions,” she added. “Arumjigi would like to introduce the true taste of Korea, which is not simply about a spicy taste, but much more diverse than that.”

When Udas asked about the foundation’s ultimate goal, Hong answered, “We would like to get the spirit of Seonbi - Korean scholars during the Joseon Dynasty (1392-1910) who pursued a simple and graceful lifestyle - to be introduced into modern people’s lives.”