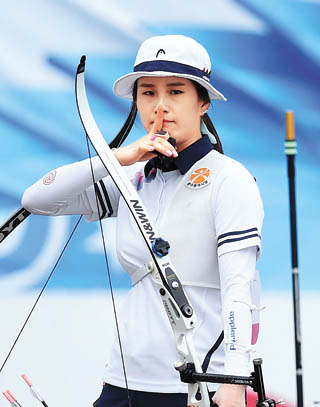 Recurve archer Ki Bo-bae at the Gwangju Summer Universiade on July 8. Ki, who won two gold medals at the Universiade, was using a bow made by Win & Win. [NEWSIS]

At the Gwangju Summer Universiade, the Korean recurve archery team produced four gold, three silver and one bronze medal to prove why the country is a powerhouse in the sport.

Win & Win bows are one of the most popular in the world. According to the company, whose main factory is in Anseong, Gyeonggi, 169 of the 325 archers in the 2012 London Olympics used its bows. Though competition is fierce with the U.S. bow maker Hoyt and Japan’s Yamaha, Win & Win has been solidifying its status at the top.

Park, 59, is one of the first-generation archers in Korea. After competing with the Korean national team in the 1970’s, he coached the Korean men’s team to victories in the 1985 World Archery Championships, the 1986 Asian Games and the 1988 Seoul Olympics. He stepped down as the national team’s coach in 1992 and founded Win & Win the following year, hoping, he said, to make the world’s best bow.

In the early days, Park had some setbacks, and at one point had to recall all the bows when fractures were found in them. But with continued research and development, the company gradually upgraded its skills.

In particular, it focused on making a bow that archers could use comfortably, and sought advice from archers on how to do that. The company’s products started to earn a good reputation; Yun Mi-jin used one to win gold medals at the 2000 Sydney Olympics and the 2004 Athens games.

Even the North Korean leader Kim Jong-un has shown an interest in them, although the evidence is a little shaky. Visiting the Chongchun Sports Village in Pyongyang in March 2013, he apparently smiled while looking at the North Korean archers’ bows, which had been manufactured by Win & Win in 2012.

“I think they bought them in China,” said Park. “Maybe North Korean archers knew how good South Korean bows are.”

Park has his eye set now on the mountain bicycle market. He started work on frames in 2013 using the same carbon technology. In January, the company displayed its Wiawis bike frame, which weighs only 630 grams (1.4 pounds), 40 to 50 grams lighter than other sports bikes.

“Because our bows became the world’s No. 1 through the Olympics, I want to see our bikes getting global attention through the Tour de France,” Park said confidently.