Idol groups get personal to keep their popularity

Idol groups get personal to keep their popularity 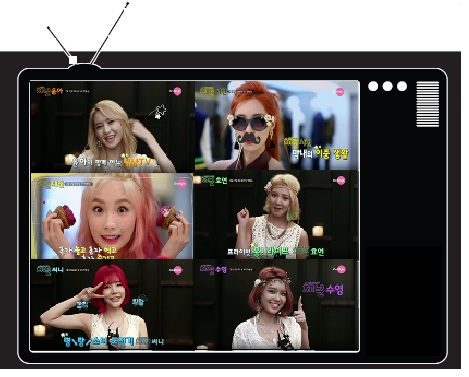 At the top, Yoona poses for her Nyam Nyam Channel, left, while the youngest member Seohyun is trying to disguise her identity to run her individual channel named “Double Life.” Taeyeon, center left, organizes “Self Master,” where she shares tips on how to spend some time alone. And Hyoyeon, center right, will display her dancing through “Heung Life.” Bottom left, Sunny will show how cheerful she can be via “Challenge on Becoming a Cheerful Girl” and Sooyoung, bottom right, shows some tips on how to match up clothes for daily fashion through “What Should I Wear Today?” Screen capture from Naver TV Cast

Keeping their private lives secret was one of the best marketing strategies for idol groups back in the 1990s and early 2000s because fans were highly drawn to celebrities, puzzling over their real lives, becoming obsessed with learning everything about their particular favorite, while the groups just performed on stage and disappeared.

The interactions between celebrities and fans, however, has completely changed over the past few years, from one-way to two-way communication.

According to culture critic Ha Jae-geun, one of the biggest factors that contributed to the trend is the change in the music industry.

“In the ’90s, singers mostly pursued their careers through regular albums, so it was natural for them to disappear for several months and reappear to the public with a new record,” said Ha, implying that singers were not easily forgotten.

But in today’s media, where new groups debut frequently, stars have to work harder to maintain the public’s attention.

“These days, most idol groups’ careers revolve around releasing singles” said Ha. “They continuously unveil singles without any break because if they don’t appear to the public for a few months, they are very likely to be edged out by new bands [which have emerged more frequently in recent years].”

As a result, it has become natural and necessary for the celebrities to adopt more accessible personas to appeal to the public and stay popular.

One of the most effective methods of appealing to a wide number of people is through reality TV shows that feature idol stars viewed by thousands inside and outside of Korea. Many of today’s top stars, such as Exo and Big Bang, appear on various shows to demonstrate to fans their true personality and how they behave “behind the scenes.”

Compared to existing reality programs, a new kind of program, which is individual broadcasting, is assured the limelight.

Thanks to the new form of the program, the level of communication between idol bands and their fans has recently developed even further, showcased by Channel SNSD, a new kind of reality program starring SM Entertainment’s Girls’ Generation.

Instead of being organized by screenwriters and producers like usual reality shows, Channel SNSD provides each member with her own individual segment, which Ha calls “an advanced communication method between the idol group and its followers.”

In the program, each member hosts her own section of the show with content she has prepared, which gives viewers more information about their favorite member’s personality and interests.

Each segment also features different kinds of content, from fashion to dancing. One of the members Yoona, for instance, runs Nyam Nyam TV, where she shows viewers how to cook and also betters her own skills by inviting chefs as guests.

“I have always been interested in cooking and have always wanted to learn how to cook,” said Yoona at the press conference on July 21. “And since this is a reality program, I wanted to show my fans a different aspect of myself, which eventually led me to organize the segment.”

Member Yuri, who is well-known for her fit figure and interest in cosmetic products, offers health and beauty tips.

Although the channel is gaining huge initial attention just for featuring Girls’ Generation, arguably the nation’s top female band, some wonder whether or not each star will be able to create enough compelling content to fill an entire channel.

“In the MBC program, viewers often get bored with the parts of the show run by celebrities that don’t have well-prepared content,” said Yoo. “So each member of Girls’ Generation will have to bring solid content instead of only their looks.”

“In order for the girls to successfully carry on the program, it is important that each member thoroughly and fully prepares content for her part of the show [instead of solely relying on their status],” because viewers are more drawn to interesting content instead of a celebrity’s fame when it comes to the broadcasts.

This proved true for relatively unknown restaurateur Baek Jong-won, who shot to fame with “My Little Television” by showing off simple recipes in his part of the show that led him to win higher viewership for his broadcast over that of various top celebrities such as Hani of female act EXID, Key from the all-male act Shinee and Choa of girl group AOA.

“In order for Girls’ Generation to provide their viewers with high-quality programming for their Channel SNSD, it is crucial that they spend time and effort in running their channel,” said Ha.