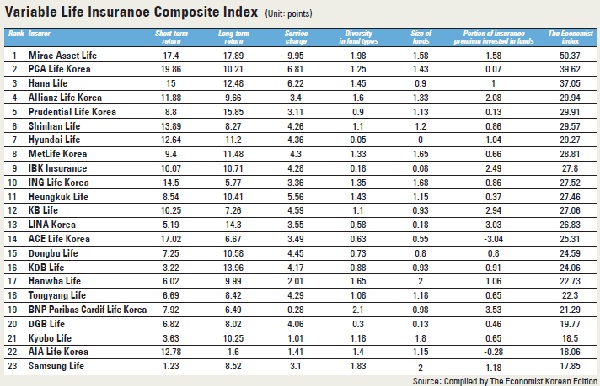 Many experts these days say that the variable life insurance product is a must-have in one’s financial portfolio to prepare for retirement life, so many insurance consumers have already registered, or at least been recommended to register. 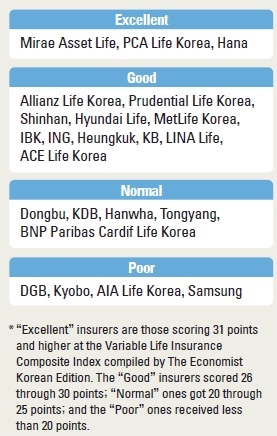 Variable life insurance is a permanent life insurance that allows customers to install a certain amount of premiums in a separate account, which is mainly used for investing in equity markets. According to a CNN Money report, the product usually has returns ranging from 3 to 8 percent. The final insurance money may turn out differently depending on the fund’s returns.

Mirae Asset Life Insurance became the variable market’s top-ranked in the first quarter with a score of 53.95 points and maintained the stronghold during the following quarter with 50.37 points. Mirae Asset had a score 10 points higher than the runner-up.

“We have a different asset allocation strategy than other insurers,” said CEO and Senior Vice Chairman of Mirae Asset Life Choi Hyun-man regarding their success. “In times of market atmosphere fluctuation, it is often the case that insurers’ asset allocation principles get influenced by these changes. However, Mirae Asset Life has set our own unwavering principle and maintained it. It was the success recipe of how we kept our return rates high for variable insurance products.”

Hana Life Insurance was ranked third in the second quarter, with 37.1 points for the second straight quarter.

A noteworthy part here is the performance of PCA Life Insurance Korea, which ranked second in the second quarter after largely improving its short-term return rates. In the first quarter evaluation, PCA Life received a minus-level score for short-term returns, but its overall score jumped after improving in that area.

The three-month and six-month variable insurance fund products at PCA Life Korea showed the highest return rates of all insurers operating in Korea. PCA Life Insurance Korea claims itself to be an insurer specializing in variable life insurance, which means the firm paid utmost attention to composing a good product. In particular, PCA Life has a vast variety of overseas fund-linked products.

Because the insurer focuses on overseas equities, PCA Life’s variable life insurance product can offer better returns than other insurers during times when overseas equities enjoy high returns and even when local bonds see their returns drop.

Prudential Life Insurance Company of Korea is another insurer that saw its rank jump, to No. 5 in the second quarter compared to its first quarter rank at 10th. The advance came after the company ranked No. 2 in the long-term return category.

“We are raising our products’ return rates by systematically planning asset allocation, managers and fund allocations [depending on each customer],” said Lee Cheol-yeong, chief of the variable asset management team at Prudential Life Korea. “Our utmost goal is to raise long-term return rates in order to deliver to our customers the promised amount of assets in the future.”

Elsewhere, AIA Life Korea was the only insurer that was ranked below No. 20 for two straight quarters. AIA placed No. 21 in the first quarter and No. 22 in the following quarter, showing that the poor performance was not a temporary phenomenon.

PCA Life Korea’s products of various kinds topped short-term returns, including equity- and bond-linked and other types of funds. One of PCA Life’s variable life insurance products, called “A Plus China,” which is managed by Eastspring Asset Management Korea, offered returns of up to 10.93 percent in the second quarter. This fund, whose net assets are about 431.8 billion won, invests in the Chinese market and offered the No. 1 return rate among large-size fund products of 100 billion won or larger in net asset - at least it did so before the recent China stock meltdown.

Samsung Life ranked at the bottom, at No. 23 in the second quarter, unlike its middling rank in the first quarter. Samsung holds the nation’s largest net assets in variable life insurance, but its return was the lowest. That was mainly because Samsung’s variable life insurance funds were in many funds that focus investments in Samsung affiliate shares.

Shares of Samsung Group affiliates saw a mass exodus of assets and a slowdown of return rates in the second quarter, after the merger decision of Cheil Industries and Samsung C&T, therefore influencing the return rate of Samsung Life’s variable life insurance funds.

“Group-themed equity funds only invest in affiliate companies of a certain conglomerate,” said Kim Hu-jeong, an analyst at Yuanta Securities Korea, “which is a type of sector fund, fated to have volatility when good or bad news about the conglomerate flies in.

“Samsung Group-themed equity funds cannot be free from the IT industry’s business environment, but the sector had to fight a tough second quarter, and different issues, like a merger between affiliates, turned out to be a risk factor.”

Mirae Asset Life was No. 1 in long-term returns for mixed-equity funds and mixed-bond funds. The insurer ranked second in equity funds.