Social giving is a priority for group

Social giving is a priority for group 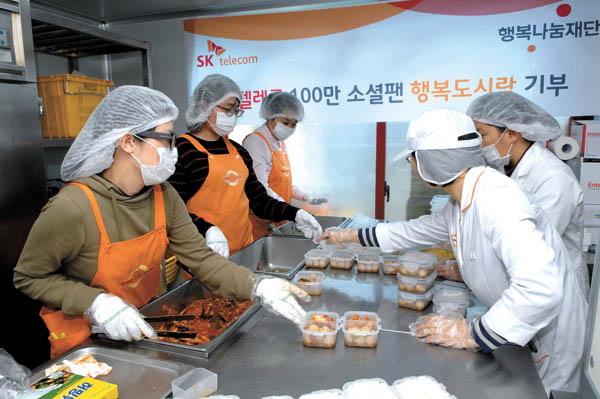 Employees of SK Telecom provide lunch boxes to underfed children as part of the company’s social contribution activities. Provided by the company

SK Group’s philosophy of social contributions is to solve problems by sharing the profits they earn with the local community. Rather than just give away things, the company wants to engage with the social communities by operating diverse types of events and they think one of the keys to success is to raise people with a warm heart.

SK is recently raising workers for social enterprises as it became a possible solution that can ease the income imbalance. The group’s chairman, Chey Tae-won, has been consistently saying that the country’s business ecosystem can get healthy when corporations and academic circles study social enterprises and their related systems including finance, marketing, personnel and management.

As part of its work to realize such ideas, SK is supporting a society to foster experts in social enterprise. In cooperation with the Korea Advanced Institute of Science and Technology, the company opened a Master of Business Administration program specializing in raising leaders of social enterprise for the first time in Korea so that graduates of the program can establish their own ventures. The company believes that will strengthen the business environment here.

The group’s mobile carrier affiliate SK Telecom also runs a venture support program known as “Bravo Restart,” which helps people’s overall process of developing an enterprise including brainstorming and developing specific business portfolios. The company sends its employees as mentors to help individual entrepreneurs realize their ideas and also support the necessary equipment and allow people to use the company’s facilities.

The company spent about 1.7 billion won on this support program and 10 teams participated in the first period of Bravo Restart and all of them successfully developed their own ventures and started businesses.

A venture “Smart Gym Board,” a health equipment manufacturer, started selling their products in March and is currently knocking on the doors of the global market. It is also developing a laser beam projector in cooperation with SK Telecom with a goal of selling the product from the third quarter.

The company said 13 teams have joined to this program’s second period lately and will work together with the company until September 30 to realize their ideas. The company said many of ideas are related to IT, including an access security system and smartphones for blind people.

The company also opened the doors of T Open Lab, a R&D center opened in June 2012 in Bundang, southern Gyeonggi, so its business partners and individual researchers can realize their creative ideas by utilizing the company’s infrastructure. SK Group also tries to help local communities, purchasing necessary furnishings including beverages from traditional markets and also giving food and fruits to rehabilitation centers for disabled people.