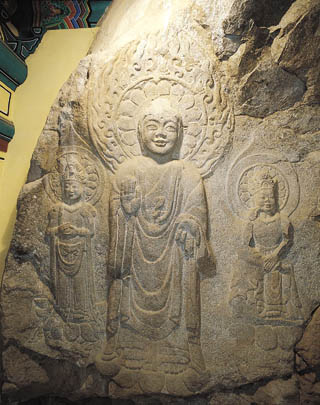 Carved on a rock cliff on Mount Gaya in Seosan, South Chungcheong, this Buddha triad consists of Shakyamuni Buddha flanked by two bodhisattvas, one standing and the other seated in a meditation pose.

The triad has been admiringly dubbed “Smile of Baekje” and is comparatively better preserved than other contemporary rock-carved images, thanks to its location under a ledge on the cliff.

The principal Buddha, standing on a lotus pedestal, has a plump face with lunate eyebrows as well as almond-shaped eyes, a flat, wide nose and smiling lips, all contributing to a benign look characterizing the Buddhist images of the Baekje Kingdom (18 B.C. to A.D. 660).

The bodhisattvas also have plump, smiling faces. This triad, which is unique since it includes a pensive bodhisattva, is believed to have depicted the three Buddhist deities - Shakyamuni, Maitreya and Dipankara - who appear together in the Avatamsaka Sutra.