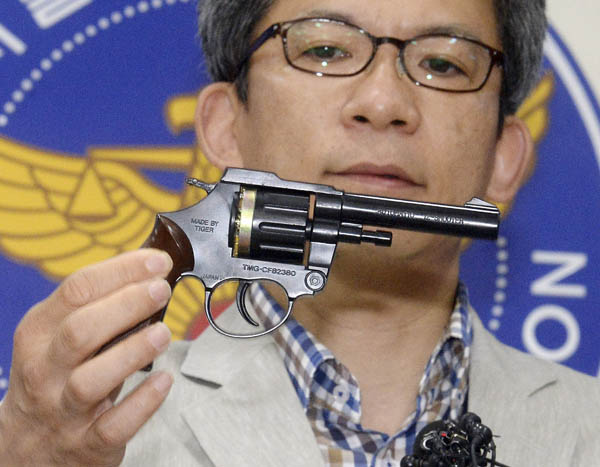 A Seocho Police detective on Sunday holds the toy gun he said was used in a bank robbery last week. [NEWSIS]

Seoul police said Sunday that they had arrested a man who allegedly made off last week with about 24 million won ($20,746) from an MG Community Credit Cooperatives branch in Jamwon-dong, southern Seoul.

The Seocho Police Precinct has identified the man, 53, only by his surname Choi, and said the arrest was made based on CCTV recordings secured from the crime scene.

Choi reportedly admitted to the theft and said he stole the money to pay off a 50 million won loan.

He was found hiding in the apartment of one of his acquaintances in Suseo-dong, southern Seoul, around noon on Sunday. His motorcycle, motorcycle helmet, a mask and a toy gun, which he used in carrying out the heist, were all found at the hideout.

The weapon he used to threaten a bank customer was apparently a toy gun the suspect had bought for his son 15 years ago, police said, quoting the man’s testimony.

Choi was transported to Seocho Police Precinct at 1:20 p.m. the day of his arrest but did not answer reporters’ questions upon arrival.

Authorities said they would file a request for a detention warrant for Choi on robbery charges.

Choi allegedly walked into the financial institution on July 20 at about 12:20 p.m. and demanded money, threatening a bank customer with the fake gun. The man used the customer as a hostage before taking 24 million won worth of cash in a black backpack and fleeing the scene on a motorcycle toward Sinsa Station.

Only a few employees were working at the branch at the time. No security guards were present.