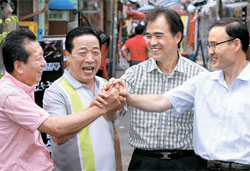 The owner of a snack stand in Jongno District’s Tongin Market found himself in a gloomy mood last week following a visit the night before from his landlord.

The vendor, who wished to remain anonymous, left his job at a company in 2011 and started a bunsik (snack) business with his retirement savings. But as the years went by, his rent continued to increase, from 400,000 won to 700,000 won in 2013, and most recently to 1.1 million won.

“It’s gotten to the point where I have to consider leasing this place out,” the man lamented.

But his situation is not unique.

Rent costs around Hongik University, Samcheong-dong, Itaewon-dong and the Gyeongridan area have skyrocketed, resulting in entrepreneurs being pushed to the wayside as they struggle - and often fail - to pay the price of doing business in some of the capital’s most popular stretches.

The Geumcheon Bridge Market in Naeja-dong of Jongno District has also fallen victim to this phenomenon. Here, about 100 shops line both sides of a narrow alley.

The place was designated as a culinary cultural road in 2012 by the Jongno District Council and was renowned for its delicious food.

The market gained popularity along with the nearby Seochon area - and rents rose. The average monthly rent in 2009 formerly stood between 70,000 and 80,000 won, but surged to 150,000 won in 2013. Most of the well-known restaurants there left the market, and the number of regular customers decreased, according to district tenants.

But the situation prompted district residents to seek out a solution to the rent problem. Landlords and tenants in the area organized a merchants’ meeting in Aug. 2014, citing the trend in other regions as examples for their argument - notably, the circumstances surrounding Bukchon Hanok Village and Samcheong-dong in Jongno District, which saw rent fees skyrocket.

“Looking at other areas that have dealt with the same phenomenon, I had the conviction that tradition and friendship [friendliness among tenants and landlords that is maintained through not increasing the rent] could not be lost as a consequence of raising the rent a little,” said Jeon Seung-cheol, 51, who owns two buildings.

Half of the landlords in the group were building owners, as well as being tenants themselves.

“Because my building owner hasn’t raised my rent, I didn’t have to raise rent in another region where I have a tenant,” said one representative who runs a restaurant in Jongno District.

“All the merchants have known one another for 20 to 30 years. To emphasize friendship rather than money, we’ve called the merchants’ society a friendship society,” said Yu Jae-shin, 56, a landlord representative.

Efforts by the group members came to fruition with a “coexistence agreement,” signed in April by about 240 tenants and 40 landlords. The Jongno District Council also supported their efforts earlier this year, designating the Jongno markets as an enterprise that has the potential to thrive.

After the signing of the agreement, rents stopped rising in Jongno District.

“We decided to keep the rental fees the same for five years, considering the shops that had their contracts expire earlier this month,” said Ko Yeong-seok, the president of the landlord group, adding that 70 percent of the landlords participated in forming the compact, while increasing rent consequently wavered.

After stabilizing rent prices, merchants are now meeting in order to improve development in the region. They changed the shop signs written with English loanwords into pure Korean, following a suggestion to keep shop names distinctly Korean.

“This is an example of democracy at its best, where civilians participate directly to find a solution to everyday issues,” explained Kim Eui-young, the chief of the Institute of Korean Political Studies at Seoul National University. “Tackling problems that current political authorities cannot address supplements representative democracy.”