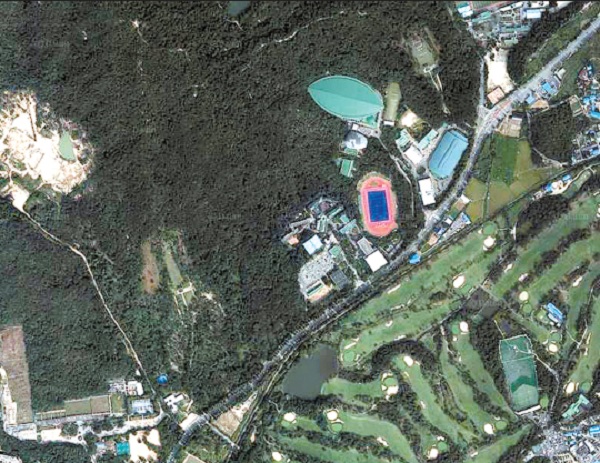 
Pointing to a line of trees to the left of the archery range at Taeneung National Training Center, former Olympian Park Sung-hyun surveyed her old stomping grounds.

“Those three ginkgo trees on the left are more than 30 years old,” she said. “The apricot trees opposite them are around 10 years old. Without those trees, there would have been no gold medal. Older alums from the Taeneung National Training Center planted those trees to block the wind from the mountains.”

Park, who won gold with her Korean teammates in the team archery event during the 2008 Summer Olympics in Beijing, is one of a number of athletes here faced with the prospect of saying goodbye to their old training spot, which has been pitted against the Royal Tomb at Taeneung in a dispute over their value as cultural assets.

With the Unesco designation, the Cultural Heritage Administration (CHA), the current landowner of the Taeneung National Training Center, has insisted on the facility’s demolition for the full restoration of the Taeneung and Gangneung royal tombs.

However, the Korean Olympic Committee (KOC) argues that the Taeneung National Training Center must be preserved as a symbol of Korean athleticism.

“The Taeneung National Training Center is the mecca for Korean athletics and the cradle of sports,” said Oh Seung-hun, a KOC official.

The Ministry of Culture, Sports and Tourism initially attempted to negotiate with both sides, with the result being that the international and indoor skating rinks, the cross-country course and the facilities prepared for the 2018 Pyeongchang Winter Olympics would be retained until the Games, while other sporting amenities there will be taken down one by one.

However, the KOC moved to register Taeneung National Training Center as a cultural asset with the Seoul Metropolitan Government, which in February deemed the training center a legacy for the future.

This designation has only strengthened the fight for the center’s full preservation.

“Restoring [the tombs at] Taeneung and Gangneung is important, but the city believes in keeping even one part of the Taeneung National Training Center as a symbol of current sports culture,” said a Seoul Metropolitan Government official. “We’re pursuing a plan to save at least one building [at the center] to use as a sports museum.”

Meanwhile, the CHA is sticking to its original position that the training center be completely torn down.

“We are pushing ahead with restoration of the royal tombs, based on Unesco’s recommendation, in stages,” said Yun Tae-jung, part of the CHA’s Royal Palaces and Tombs Division.

It emphasized that when the royal tombs were established as World Heritage sites, the Korean government had promised to restore them.

In early 2000, when the application for the Royal Tombs of the Joseon Dynasty was submitted for Unesco World Heritage status, the government gave 30 million won ($25,840) to the KOC to build the Jincheon National Training Center, while at the same time giving up Taeneung.

“It’s originally the KOC’s fault for so readily giving into the promise of a new training center without taking into consideration athletes’ opinions,” said Lee Elisa, a member of the National Assembly and the first female KOC president, who directed the Taeneung National Training Center from 2005 to 2008. “The KOC did not take into account the Taeneung National Training Center’s cultural value.”

Now, the KOC is looking to go back on its original decision and preserve the training center, a dispute that has attracted the attention of experts, who themselves remain conflicted on the issue.

“Thanks to the Taeneung National Training Center, Korea was able to come out as a powerful nation in athletics,” said Na Young-il, a professor in the Department of Physical Education at Seoul National University. “A way to delay the demolition of the [gym, volleyball courts] and other buildings and letting it coexist with the royal tombs needs to be found.”

But Jang Gyeong-hui, a professor in the Department for Cultural Asset Preservation at the International Graduate School of Art and Design at Hanseo University in North Chungcheong, argued in favor of the CHA’s desire to restore the royal tombs, despite the possible costs.

“The promise with Unesco to restore the royal tombs must not be disregarded. As the 50th anniversary of the Taeneung National Training Center approaches, plans to restore the tombs to their original state 50 years ago must be pursued,” Jang said.

However, An Chang-mo, a professor at the Graduate School of Architecture at Kyonggi University, warned: “Once something is demolished, it’s impossible to restore, as was the case with the Japanese Government-General Building. There needs to be sufficient discussion.”

An alternative solution could be a revision to the Cultural Properties Protection Law being pushed forward in the National Assembly, which concerns the introduction of preliminary cultural assets.

The law currently only allows items older than 50 years old to be officially recognized as cultural properties, which ensures their preservation, restoration and upkeep, but the amendment would make it possible for properties under 50 years old to be regarded as preliminary cultural assets and be similarly protected and preserved.

“If a system of preliminary cultural properties is adopted, then the Taeneung National Training Center and other modern buildings with symbolic value can be acknowledged for their cultural value, and citizens can be made aware of the need to preserve them,” said Lee Sang-il, a Saenuri Party member who sponsored the revision.