Typhoon Halola to bring rain as it passes by Busan

Typhoon Halola to bring rain as it passes by Busan 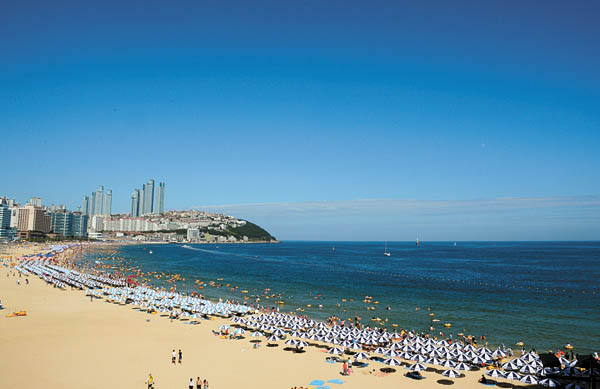 Visitors to Haeundae Beach in Busan soak up the sun on Sunday, a day before the weather forecast predicted rainfall in connection to Typhoon Halola. [NEWSIS]

Typhoon Halola is forecast to pass through waters off the southern port city of Busan early Monday morning, bringing rainfall between 30 and 70 millimeters (about 1.2 to 2.8 inches) along the coastal areas of South Gyeongsang, the country’s weather authority said over the weekend.

Halola is set to pass 130 kilometers (81 miles) south-southeast of Busan at around 6 a.m., after which the 12th typhoon of the year will likely move across the East Sea and steadily weaken near the Dokdo islets, downgrading to a tropical depression by early Tuesday, the Korea Meteorological Administration forecast.

It added that rainfall in the country’s southeast regions won’t be heavy, but winds will likely be strong.

On Sunday around noon, Typhoon Halola is expected to passed 310 kilometers southeast of Seogwipo on Jeju Island and headed north toward Busan at a speed of 15 kilometers per hour with a central pressure of 988 hectopascals (hPa) and a maximum wind speed of 25 meters per second (56 miles per hour).

The small size of the storm indicated that its impact probably won’t be widespread.

Rainfall in South Gyeongsang is expected to reach a maximum of 70 millimeters by Monday, with Jeju Island and North Gyeongsang likely to have 5 to 30 millimeters. The weather in the rest of the country will mostly be cloudy, with temperatures ranging from some 22 to 32 degrees Celsius (72 to 90 degrees Fahrenheit).

The weather forecast for the rest of the week shows no sign of rain except for Wednesday, when the seasonal monsoons are expected to shower areas of Seoul, Gyeonggi, western Gangwon and the Chungcheong and Jeolla regions.

Precipitation will range between 3 to 22 millimeters that day, with the Seoul and Gyeonggi regions hit most heavily. Temperatures will be average for the time of year, hovering around 20 to 33 degrees Celsius. Seoul will reach its highest on Monday at 31 degrees Celsius, whereas Gyeonggi will hit 32 degrees the following day.

The summer monsoon has so far been attributed to improving conditions at the Soyang River Dam on the upper tributary of the Han River, where water levels plummeted to one of the lowest in 40 years amid an unprecedented drought that affected the entire country earlier this year.

The water level now hovers around 158 meters, more than 5 meters higher than the 152.3 meters in mid-June.