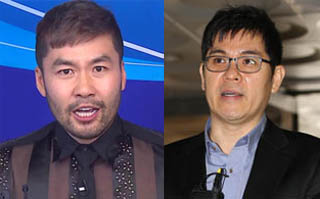 Entertainers Noh Hong-chul, left, and Kim Yong-man, who previously worked independently without a home agency, signed exclusive contracts over the weekend with FNC Entertainment, the company confirmed on Monday.

Their return on air has yet to be confirmed, though a source involved with the talent agency commented that the company signed Kim and Noh because both are expected to reappear on television in the near future.

Noh was accused of driving under the influence in November, and Kim was charged with illegal gambling in June 2013, having pursued the activity from Jan. 2008 to May 2011. Since the accusations against them, both stepped down from all programs on which they were participating.