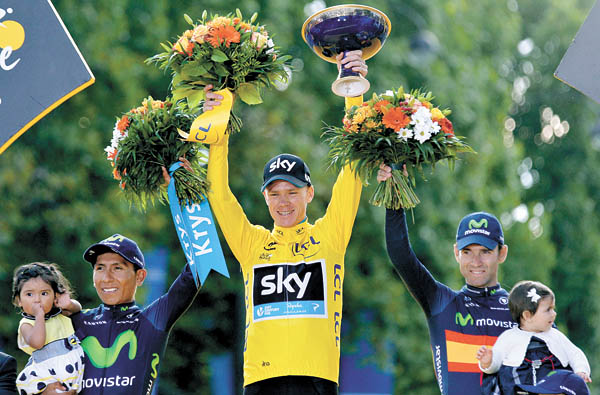 Chris Froome of Britain celebrates after his win, clocking an overall time of 84 hours, 46 minutes and 16 seconds. [XINHUA/NEWSIS]

PARIS - All for one, one for all, and all bathed in yellow. Arms over each other’s shoulders, linked together in a long line of happiness, Tour de France winner Chris Froome and his teammates pedaled slowly over the finish line, soaking up the applause Sunday on the Champs-Elysees.

Three weeks of furious racing, of beating back both a tenacious Colombian, Nairo Quintana, and doping suspicions that are Lance Armstrong’s poisonous legacy to cycling, were over. Time for the winner’s speech.

“I understand its history, good and bad,” he said. “I’ll always respect it.”

The Tour is still French. But British riders have won three of the last four: Bradley Wiggins in 2012 and now two for Froome, following his first win in 2013. That puts Britain on equal footing with the United States, with three from Greg LeMond - and minus seven stripped from Armstrong.

Under suitably British weather, on rain-slickened roads, Froome took it easy on the last Stage 21, his work done having grimly resisted Quintana’s late assault on his hard-won Tour lead the previous day on the final Alpine ascent.

The tired 160 riders - of the 198 who started - didn’t bother racing for much of the largely flat 110-kilometer (68-mile) ramble from Sevres, in the French capital’s southwest. To minimize the risk of crashes, Tour organizers stopped the clock early, on the first of 10 laps up and down the Champs-Elysees’ cobblestones.

That locked in Froome’s lead to guarantee victory. He smiled broadly as he pedaled past flag-waving spectators. He still had to ride the laps to complete the full race distance of 3,354 kilometers.

But knowing the title was his, he didn’t have to panic when a paper bag got stuck in his back wheel. He simply stopped and changed bikes. He also had time to raise a glass of Champagne in the saddle and stop to put on a raincoat under the iconic yellow jersey.

While sprinters dashed ahead for the stage win - snatched by Andre Greipel, his fourth and Germany’s sixth at this Tour - Froome and his teammates, wearing yellow stripes on their shorts and helmets, linked together for their slow-motion, chorus-line finish. “This is your yellow jersey as much as it is mine,” Froome said.

Their powerful riding, chasing rivals in the mountains and protecting Froome on flats, was vital. So, too, was the planning of Dave Brailsford, the organizational brains at Froome’s Team Sky, which has far surpassed its goal in 2009 of nurturing Britain’s first Tour winner within five years.

In a repeat of 2013, Quintana was again runner-up. But the margin was much smaller this time: 1 minute, 12 seconds, the tightest win since 2008.

Third-placed Alejandro Valverde, Quintana’s Movistar teammate from Spain, made the podium for the first time, moving up from fourth last year.

For all the pre-Tour talk of a possible four-way battle between Froome, Quintana, 2014 champion Vincenzo Nibali and two-time winner Alberto Contador, only the 25-year-old Colombian - again winning the Tour’s white jersey as the best young rider - gave the yellow jersey a run for his 450,000 euros ($494,000) in prize money.

“He’s a great rival,” Quintana said. “He suffered a lot to win.”

With more experience and more smarts in the first week when he lost too much time, Quintana would have posed a bigger threat and perhaps come closer to becoming the first Colombian winner.

This Tour was mountain-heavy, suiting Quintana’s climbing strengths. Future Tours could have more time trials, which Froome excels at. Their developing rivalry, with youth on Quintana’s side against the 30-year-old Froome, could help the sport win back fans disgusted by the systematic deceit of Armstrong’s era.

“I have lots of years ahead of me,” Quintana said.

Totaled up, Quintana took more time off Froome on the Tour’s high mountain climbs than the other way around.

Yet the Colombian didn’t have to contend with the scrutiny, doubt and thinly-veiled suggestions of doping that Froome was forced to respond to on an almost daily basis, mostly with patience but also with bristle as the race wore on.